My thoughts and sympathies are with the Manchester victims and their loved ones. 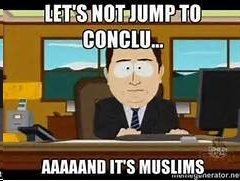 Another day, another attack by Muslim fascists in the name of their blood-crazed religion. (If you doubt me on the “daily” part read my periodic Muslim Atrocity Roundups. This is a global conflict and not a day goes by without blood being shed.)

Salmen Abedi is the purported name of the Muslim fascist suicide bomber responsible for nearly two dozen deaths and for injuring over 120 more innocent people.

The Muslim attacker targeted a largely female crowd from around 6-18 years of age.

The political left is already defending the motives of the attacker … after their usual round of denying that it was yet another Muslim attack for as long as they could.

After a previous Muslim fascist attack, the Muslim mayor of London taunted  England that they need to “get used to it.”

FOR MORE ON LIBERALS AND CONSERVATIVES CLICK HERE:     https://glitternight.com/category/liberals-and-conservatives/