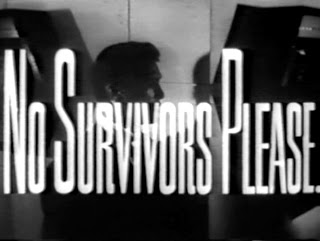 NO SURVIVORS PLEASE (1964) – This obscure black & white wonder from West Germany is one of the most memorably weird movies of its time. It’s not easy to describe what makes it so appealing. The fundamental story – aliens plan to wipe out all life on Earth – has been done too many times to count. Not even their method is all that unique – the ET’s project their consciousness into the bodies of freshly-dead human beings – has been done in other movies.

No Survivors Please is certainly not cheap, either. The action takes place in various international locations, the actors were all reasonably big in Europe at the time and the production values are impressive. There are no laughable spaceships, no goofy-looking aliens and no lame monsters on the loose.

There’s just something about this film, though. While not colossally bad it still keeps you laughing the entire running time. A large part of the reason is the fact that the people who get possessed by the aliens often behave LESS weirdly than the supposedly “normal” people do.

We join the story with the aliens’ plot already pretty far along. They’ve been engineering the deaths of assorted scientists, politicians and military figures from around the world and then possessing their bodies. From there they manipulated global events to the degree that they are on the verge of secretly provoking a nuclear war that will annihilate all life on Earth.

All the ET’s need is a bit more time and their plans will be fulfilled. But darn the luck, a Paris-based reporter named Howard Moore (Uwe Friedrichsen) gets in their way. For some reason Moore is the only person in the world who finds it odd that so many high-powered people have recently been miraculously surviving accidents which should have killed them.

Our hero wants to interview the figures about their “near-death experiences” but begins to suspect there’s far more than luck involved. The aliens realize Moore is on to them so they immediately … make sporadic, half-hearted attempts to kill him.

Howard is the typical Bland White Guy hero from sci fi movies of the 50s and 60s. Stiff and unmemorable, yet irresistible to women. Not particularly bright, yet aided and propelled along by ridiculous coincidences and plot contrivances.

The aliens (who hail from a system in the Orion constellation) brag about not being weakened by the emotions that they feel limit us humans, telegraphing what will come. Yes, naturally they start to succumb to those emotions they formerly found so icky and needless to say one of the aliens in a female body falls in love with Howard Moore.

You can guess most of the storyline from there. I know that recap sounds like a lot of the same ol’ same ol’ for alien invasion movies but believe me, it’s all in the execution. No Survivors Please has a hilarious way of staying mere millimeters from parody.

The characters in the movie – possessed by aliens or not – have a perpetually unnatural air about them, but not in a way that seems intended. It’s more like they’re doing impressions of celebrities you’ve never seen or heard of and that their odd mannerisms, weird poses and bizarre line readings would probably seem hilarious to people familiar with the figures being caricatured.

Or perhaps a better way to describe it is that it always feels like the dialogue and sound effects have all been over-dubbed for comic effect, like in What’s Up, Tiger Lily? or What’s Up, Hideous Sun Demon?  However, it’s all meant to be 100% serious, which makes the film much funnier than any comedy could EVER be.

The utterly straight-faced way one of the aliens-in-a-human body explains their host-shell’s survival to the reporter  – by saying he has always had a way of charming birds into his hands and then drinking their blood – will have you grinning from ear to ear. And that’s just a small part of the fun.

SPOILERS: To give No Survivors Please its due the ending DOES offer a surprise or two. Several minutes before the finale our hero Howard Moore is finally killed by the aliens and his body possessed. The woman he loves can – believe it or not – tell the difference between the stiff’s behavior before and after his possession and manages to thwart the aliens’ plans.

She does that by appealing to her possessed employer’s growing human emotions. (Rather than being in love with the girl himself he was happy to see she had found love with the reporter)

But then the movie double-crosses us by having the aliens succeed in destroying the world anyway just a few months later. And the crowning irony is that they do it with the now-possessed corpse of the hero’s girlfriend.

No Survivors Please is still awaiting the cult following that it deserves. It even manages to make the climactic nuclear holocaust seem funny somehow. ++

FOR MY LOOK AT BLAXPLOITATION HORROR FILMS:  https://glitternight.com/2011/10/26/a-very-blaxploitation-halloween/

FOR MY LIST OF THE TOP ELEVEN BAD MOVIES FOR HALLOWEEN: https://glitternight.com/2011/10/24/the-eleven-most-neglected-bad-movie-classics-for-halloween/

FOR MY LOOK AT MEXICAN HORROR FILMS CLICK HERE:  https://glitternight.com/2011/10/31/a-halloween-mexi-monster-bestiary/