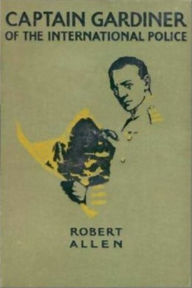 CAPTAIN GARDINER OF THE INTERNATIONAL POLICE (1916) – Robert Allen Dodd wrote this story one hundred years ago under the name Robert Allen. Narration informs us that the story is set 60 years after the conclusion of the then-raging World War. Since we know it ended in 1918 we can look forward to visiting the “far-off future” of 1978.

A multi-national entity called the International Federation is one of the major world powers along with the Chinese-Japanese Alliance and the Muslim Confederation. The International Police have been the Federation’s military and intelligence service but after decades of peace there is emerging pressure to disband the I.P. Amid the ongoing political and bureaucratic wrangling over that prospect our hero Captain Gardiner and his colleague Major Wilkie undertake a dangerous mission.

Traveling by the super-fast dirigibles used in 1978 (LMAO) the two agents make their way to Peking to obtain the secret war plans of the Chinese and Japanese Alliance. The Alliance plans to wait until the I.P. is disbanded then attack the west.  Gardiner and Wilkie’s co-conspirator is a Chinese traitor named Wu, who is the last descendant of the Manchu rulers. Wu hates the current government and hopes to take over China if the International Federation defeats the Sino-Japanese Alliance.

Or so Wu wants them to believe. In reality he has lured Gardiner and Wilkie into a trap, arranging for their capture before they can leave the country with the plans. Wilkie kills himself after telling Gardiner to cut him open and hide the plans in his corpse so that when his corpse is sent back to the Federation they will get the plans.

Gardiner complies with the bizarre request but things don’t go as planned. Unable to find the plans the Chinese captors torture Gardiner, even castrating him. The I.P. agent cracks and reveals that the plans are hidden in Wilkie’s corpse. The Chinese authorities release the broken man – presumably after laughing at the insane plan that Wilkie hatched.

Gardiner deserts from the International Police, adopts the identity of a Lieutenant- Colonel Smith and – in the tradition of The Four Feathers – redeems himself for his weakness under torture by scoring military intelligence coups that make the International Federation victorious over the Chinese and Japanese Alliance in the resulting war.

With the I.F. triumphant, Gardiner comes out from undercover and is considered cleared for his failures on the Peking mission. The Federation politicians have decided that the war proved the International Police should never be disbanded since new menaces may always lurk over the horizon.

The weaponry used in the war is basically just souped-up versions of existing 1916 arms, right down to aerial battles between “futuristic” dirigibles. Same deal with all the technology in the tale. Any average story from an old G-8 and His Battle Aces pulp features more imaginative sci-fi. This story is more like an old ripping yarn from Great Britain’s Empire Days transplanted to the future.

FOR WASHINGTON IRVING’S 1809 depiction of an invasion from the moon click here:  https://glitternight.com/2014/05/05/ancient-science-fiction-the-men-of-the-moon-1809-by-washington-irving/