Regular readers of Balladeer’s Blog are familiar with my fondness for old Silent Movies. America was D.W. Griffith’s 1924 production about the Revolutionary War. The movie is pleasant enough for the July 4th holiday season, but don’t expect a classic like The Phantom of the Opera, The Mark of Zorro or many other masterpieces of the silent era.

Batman fans may enjoy the fact that a very young Neil Hamilton – Commissioner Gordon on the much later Adam West Batman show – starred in America as Nathan Holden, a rebel Minute Man in Massachusetts. Nathan is part of a Romeo and Juliet-styled romance and is in love with Nancy Montague (Carol Dempster), who belongs to a Tory family still loyal to England. 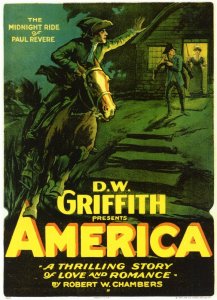 The Holdens can’t stand the snobbish Montagues and the Montagues pompously look down on the Holdens and the rest of the rebels. Nancy’s father would rather see Nancy married off to the prominent British military officer Captain Walter Butler, played with aristocratic and sadistic flair by THE Lionel Barrymore.

The story rolls along through the signing of the Declaration of Independence and on to Valley Forge and then settles in for a time during the bloody battles of the Mohawk Valley. Nathan is serving in Washington’s Continental Army by this point and the Montagues, having fled rebel-held Massachusetts, live within riding distance of Valley Forge.

Nancy’s father is still trying to cement a union between her and the British Captain Butler. The young lady will have none of it, however, since Butler is one of the infamous British officers who encourage the Empire’s Native American allies to torture and mutilate the Yankees, especially the civilians.

Everything comes to a head as our hero Nathan Holden struggles to warn the Americans at Valley Forge about a brewing surprise attack by the British and Mohawks as well as save his beloved Nancy from being ravished by the increasingly impatient Captain Butler.

There are some very nicely mounted battle scenes in this movie, in addition to serviceable depictions of various historical moments. America, while far from flawless, is a very good movie that is perfect for this time of year.

FOR THE REVOLUTIONARY WAR ACTIVITIES OF ALL 59 SIGNERS OF THE DECLARATION OF INDEPENDNCE CLICK HERE: https://glitternight.com/2012/07/03/sacred-honor-quick-facts-about-the-signers-of-the-declaration-of-independence/

2 responses to “AMERICA (1924): A SILENT FILM FOR INDEPENDENCE DAY”