AMERICAN KAIJU: THE AMAZING COLOSSAL MAN VS THE CYCLOPS 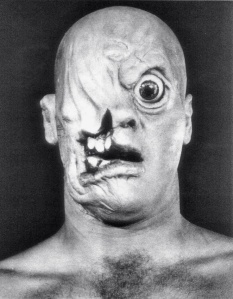 In this episode the 60 ft tall Glenn Manning gets summoned from his Area 51 home to disprove reports that “he” has been marauding around Mexico. The Amazing Colossal Man crosses the border and soon encounters the real figure responsible for the reign of terror.

That figure is none other than the Cyclops – no, not from Greek myths but the monster from the 1957 movie of that title. (The ever-thrifty Bert I Gordon used this skull-face creature mask in both The Cyclops and War of the Colossal Beast.)

In keeping with the 1950s zeitgeist Wozniak depicts the rogue, ugly version of Glenn Manning to be part of a Communist Plot. The Soviet Union had its scientists try to make a Colossal Man of their own but all of the humans they tried it with either died immediately or simply grew into a mass of malformed flesh.

After thousands of dead human guinea pigs the Soviets at last got a Colossal Man of their own, but with a hideously deformed face and imperfect vocal chords. The test subject retained his intelligence, though, so the Communist government decided to make the best of a bad situation.

They sent their giant – code-named the Amazing Colossal Proletarian – to Mexico wearing the world’s largest scuba-diving suit. Once arrived the agent doffed his diving outit and began to prey on bread trucks, ranches and whatever else he encountered, always careful to keep his mangled face as much out of sight as possible.

America’s giant flushes out his Soviet counterpart and the battle is on. The two titanic combatants trash plenty of buildings in Acapulco as they go at it. SPOILER: Ultimately the Soviet double is defeated when Glenn Manning maneuvers him into high-voltage wires, killing the impersonator.

5 responses to “AMERICAN KAIJU: THE AMAZING COLOSSAL MAN VS THE CYCLOPS”