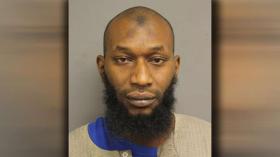 The Muslim man charged with setting the mosque on fire.

Despite the media’s incessant, sniveling  warnings about alleged Islamophobia they never have any specific examples. The ghoulish newsreaders were licking their chops with glee at the thought that maybe a Christian or a Jew had set fire to a Houston mosque on Christmas Day.

Once again the media was left saying “D’OH!” as security camera footage from nearby businesses led to the arrest of Gary Nathaniel Moore – a Muslim who regularly attended the mosque. Moore reportedly prayed there up to five times a day for years.

Was he trying to fake an “anti-Muslim hate crime” the same way people try to fake Bigfoot or UFO footage?

Time will tell. But expect the media to willingly ignore this story now that a Muslim has been charged.