PRECIOUS FIND (1996) – This is a hilariously bad attempt to do a science fiction version of The Treasure of the Sierra Madre. That description makes this movie sound much, MUCH better than it really is.

In the far future a lunar colony called Moon City is the jumping-off point for prospectors who travel to various asteroids trying to strike “precious finds” in the form of valuable metals and precious stones. The Christmas background adds to the fun in this UN-intentional comedy.

Rutger Hauer, whose performances run the quality gamut from Lawrence Olivier to Nicolas Cage, is very firmly in Cage territory in this bomb. Hauer plays Armond Crille, a former prospector who has given up hard work for the more lucrative trade of fleecing bored prospectors at the card-playing tables. Watching Rutger Hauer dance with the two hookers his character wins in the opening scene will have you rolling in the aisle with laughter.

Joan Chen portrays Camilla Jones, a spaceship captain with all the personality of the doorknob Chen’s character on Twin Peaks wound up getting her soul trapped in. Chen is around just because the filmmakers apparently decided they had to throw in a love interest, even though the film they’re imitating didn’t waste time with such nonsense.

Harold Pruett plays Ben Rutherford, the ostensible romantic lead. For some strange reason which is never explained Ben is capable of “sensing” where precious metals can be unearthed. It’s not a mutant power or anything like that, it’s just a plot device that lets our unlikely band of prospectors hit paydirt in an area that other miners have decided isn’t worth the effort. Pruett has no chemistry with Chen or any other character for that matter, and is so limp and unmemorable that he might as well have been a character from the Star Wars prequels.

The movie’s director Philippe Mora, the legendary low-budget filmmaker, gives himself a juicy supporting role as Kosnikov, the equipment merchant. He even gives his character a sexy romantic partner for good measure.

We all know how the story goes – Hauer, Chen, James and Pruett end up fighting over their treasure, bandits get involved and in the end nobody gets rich. Rutger Hauer’s character becomes absolutely batshit insane and goes out in a thespian blaze of infamy that Nic Cage would give his left nut to emulate. Precious Find is even worse than a Sci Fi Channel Original, so you know what you’re in for if you seek out this movie. 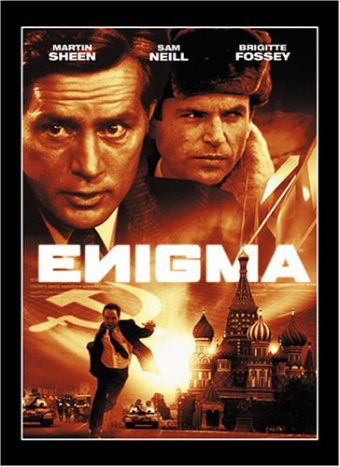 ENIGMA (1982) – This Cold War spy story had potential but that potential is blown by Martin “Eyes of a Rapist” Sheen’s awkward portrayal of the main character.

Marty portrays Alex Holbeck, a defector from Communist East Germany who now runs a dissident radio show broadcast into the East in pirate radio style. Holbeck is supposedly a swashbuckling ladies’ man, and Sheen is hilariously unconvincing in that role. He can be good in certain roles but I’m sorry, as a rebellious and fiery hell-raiser who beds a long line of ladies Martin Sheen is way too creepy and menacing to pull it off.

In December Holbeck is recruited by a CIA team in free West Germany to sneak back into the East in disguise so he can steal a decrypting device called Enigma. The CIA men (one of whom is played by the revered Michael Lonsdale) convince Alex that this is necessary to prevent the KGB from pulling off five simultaneous assassinations on Christmas Day. The Enigma machine will let the CIA decode the KGB transmissions so they can identify and protect the targets. Or is there more to it than that? You know the answer to that in a spy movie.

Brigitte Fossey co-stars as Karen Reinhardt, one of Alex Holbeck’s female conquests from the years before he defected. The disguised Sheen holes up with Reinhardt while plotting to carry out his mission. Needless to say the romantic spark is rekindled between them. By the way Sheen’s “disguises” are so lame they’re like crosses between Dana Carvey as the Master of Disguise and Peter Sellers going undercover as Inspector Clouseau.

Sam Neill steals the film as Dimitri Vasilikov, the KGB agent who is out to thwart the theft of Enigma. Neill benefits from having very, very few scenes with the awkward Martin Sheen, so his portions of the movie – where he shares screen- time with the great Derek Jacobi – elevate this flick to watchable status.

The main problem with the film strikes viewers in the face the longer it goes on – Sam Neill (soon to wow the world as Sidney Reilly the Ace of Spies) should have played the smouldering, seductive Holbeck and Sheen should have had the role of the relentless, no-nonsense KGB man Vasilikov.

The fact that the two men are in the wrong roles is highlighted by the forced love triangle with Fossey’s character. Put this choice to most women: Martin Sheen or Sam Neill? Neill wins it with a Grand Slam home-run.

Anyway, you’re in for lots of laughs when “man of 1.5 faces” Sheen is on the screen and serious entertainment when the other cast members get to act in his absence.

© Edward Wozniak and Balladeer’s Blog, 2015. Unauthorized use and/or duplication of this material without express and written permission from this blog’s author and/or owner is strictly prohibited. Excerpts and links may be used, provided that full and clear credit is given to Edward Wozniak  and Balladeer’s Blog with appropriate and specific direction to the original content.