AMERICAN KAIJU: THE AMAZING COLOSSAL MAN VS THE BLACK SCORPION 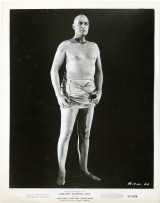 This time around the gigantic scorpion from the movie The Black Scorpion emerges from an erupting volcano in Mexico. As such creatures do it goes on a rampage, killing hundreds and causing millions of dollars in damage in and around Mexico City.

The giant Black Scorpion plays chicken with a train.

The Mexican government begs the American government to send their special giant-sized operative the Colossal Man from his Area 51 home down to help them. Uncle Sam agrees, sending good old Glenn Manning down to battle the huge black scorpion.

As the forever-whining international community is so prone to do, after getting help from the U.S., the aided nations quickly turn ugly once that aid is given. Mexico goes on to complain about the collateral damage caused by the Colossal Man’s battle with the monster that had been terrorizing the country.

After Manning withdraws prematurely after defeating the creature it turns out ANOTHER gigantic black scorpion emerges, just like in the original 1950s Black Scorpion movie! More lives are lost and more damage done from the delay caused by demanding the Colossal Man’s withdrawal and his time-consuming return in a biting reference to current events of the 21st Century!

Will Manning be able to handle this second gigantic menace? Tune in and see!

4 responses to “AMERICAN KAIJU: THE AMAZING COLOSSAL MAN VS THE BLACK SCORPION”