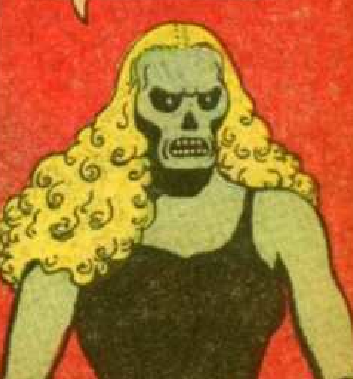 Balladeer’s Blog presents the first in my new series about neglected comic book superheroes and heroines of the distant past. With superhero movies and television shows being so popular right now it put me in the mood for some of the obscure and forgotten figures from the Golden Age. Here are my pithy story-by-story takes on our debut figure.

FANTOMAH – This superheroine was created in February of 1940 by Fletcher Hanks under one of his pseudonyms – Barclay Flagg. Hanks is a piece of work all by himself and is described as anything from “a primitive who created Outsider Art” on the good side to “the Ed Wood of comic books” on the bad side.

All of Fletcher Hanks’ comic book creations read like the chronicled psychotic episodes of a not particularly skilled ten year old artist, but his Fantomah stories are my all-time favorites. In the works of Hanks perspective, relative sizes and coloring can all change from frame to frame and the text often doesn’t even match what is being drawn.

The overall effect is literally inimitable: there is NO mistaking a Fletcher Hanks comic book story for one drawn and/or written by anyone else. Fantomah, who predated even Wonder Woman herself, seemed at first glance to be a swimsuit-clad white jungle goddess with blonde hair like Sheena and countless others. However, her REAL form was that of a magically powered skull-faced and green-skinned woman … with blonde hair.

Trying to convey the chaotic nature of Fantomah’s adventures isn’t easy. For simplicity’s sake think of her powers as being as vaguely defined – yet all-encompassing – as those of DC’s Spectre or Marvel’s Dr Strange. Or for that matter as those of Freddy Krueger in the Dream Dimension, a more apt comparison given the grisly way Fantomah deals with her foes.

In Hanks’ stories she is thousands of years old and guards her hidden jungle region the way the Swamp Thing defended his territory. “Do not bring your evil here” could easily have been HER slogan before it was the Swamp Thing’s.

I will be examining ONLY the original fourteen Fantomah stories done by Fletcher Hanks, since after he left the later writers de-powered her to a large degree and told her stories with a traditional narrative format that just can’t match the delirious style employed by Hanks himself.

I. JUNGLE COMICS #2 (February 1940) – None of the Fantomah stories are titled, which was an odd element not limited to Fletcher Hanks in the Golden Age.

Locale: The legendary Elephant’s Graveyard, a piece of global folklore that centered around a fictional hidden location where elephants go to die. The countless tusks left amid the elephant bones represented a fortune in ivory just as a crock at the end of a rainbow promised a fortune in gold.

Villains: Two white Ivory Hunters complete with pith helmets. Neither is given a name.

The Tale: Maula, an elephant, knows his time is near and he shambles off to find the Elephant’s Graveyard. The Ivory Hunters tail him at a distance with their pack of bloodhounds (?). Fantomah emerges from a waterfall to lead Maula to the graveyard he seeks.

The Mayhem: Of course Fantomah knows the Ivory Hunters are following her and Maula. She causes their bloodhounds to flee in terror then kills them in an unspecified way off-panel. Their death squeals are heard by the Ivory Hunters. (No, you’re not in Kansas anymore, readers.)

Next Fantomah appears to our villains in her skull-faced form and warns them to leave. Their greed prompts them to ignore the warning so our “heroine” lets them enter the secret cave leading to the Elephant’s Graveyard then seals it shut, trapping them. She then taunts them and causes them to fight over the ivory surrounding them. One stabs the other to death, then he himself sinks into quicksand and slowly dies under the cool gaze of Fantomah. Goths and Greenies should LOVE this woman!

Locale: The City of Gold, another hidden spot in Fantomah’s jungle domain.

Villains: Two white treasure hunters who land in the jungle in their own airplane.

The Tale: The two Great White Hunter types plan on raiding the inhabited City of Gold to steal the jewels of a figure called the Great Avenger. They intend to kill any natives who get in their way.

The Mayhem: Fantomah dispassionately watches their first assault on the city, during which dozens of natives are killed by the Treasure Hunters’ machine guns before driving them off with their spears. Undeterred the two men inject a handy mandrill with “Death Germs”, then direct it into the City of Gold where it infects and kills plenty of natives before the remainder flee in fear.

Our villains make their way through the now-abandoned City of Gold until they find the huge statue of the Great Avenger (we’re never told that figure’s significance). The statue is gold adorned with all manner of jewels and the Treasure Hunters dismantle it to make the loot easier to transport.

Fantomah appears, cures the mandrill of the Death Germs and belatedly warns the bad guys to leave. They refuse so she transforms them into green-furred, long-snouted freaks with crooked legs, then causes the dismantled statue of the Great Avenger to reconstruct itself. As the natives return to the city Fantomah flies off with the two transformed Treasure Hunters and sends them back home in their airplane, to be caged and displayed as freaks for the amusement of carnival goers for the rest of their lives.

Villains: A blonde and mustachioed Mad Scientist and his henchman. The Mad Scientist has developed a serum that makes gorillas intelligent, but enslaves them to his will. He plans to round up an all-gorilla army and take  over the world.

The Tale: Fantomah flies overhead, watching the villains and their native bearers as they trap and cage several gorillas. The Mad Scientist’s serum is a success, making the now-intelligent primates his obedient soldiers. Fantomah flies down and orders him to desist but he ignores her, of course. The natives are well aware of Fantomah’s power, however, and flee the area, followed by the Mad Scientist’s spooked henchman, who gets shot to death by his boss for trying to desert him.

The Mayhem: The Mad Scientist and his gun-wielding gorilla army march on the first inhabited village they come across and attack it. The gorillas kill natives by the truckload while the Mad Scientist orders them to literally twist the heads off of any captives.

Fantomah finally stops doing her nails or whatever she was up to and flies down to seize the Mad Scientist. She carries him over his gorilla army, then drops him into their midst so they can literally tear him limb from limb. For her finale Fantomah destroys the villain’s serum and reverts the gorillas to normal.

Villain: Mundoor, another white mad scientist and our first villain with a NAME!

The Tale: From his private observatory Mundoor sees a huge asteroid with life-forms on it and watches it crash-land in the heart of Fantomah’s territory. The fiend – watched over by our heroine – makes his way to the enormous asteroid, which has its own atmosphere and is crawling with giant dinosaur-like lizards. He coats the prehistoric monsters in a liquid that makes them glow (?) and leads them in an attack on the palace of Prince Abdul in an attempt to loot his treasury.

The Mayhem: The dinosaur army attacks the walls of the palace like it’s in a jungle Kaiju movie. Fantomah swoops in and levitates all of the people in the monsters’ way to safety, leaving them all suspended in mid-air far above the dinosaurs. Next she levitates the entire palace to join them.

Fantomah’s warning to Mundoor to call it all off goes ignored, naturally, and he orders his creatures to leap up at the levitating palace. They do but Fantomah physically engages them and beats them down. Mundoor now directs his dinosaur army to attack the actual city of Simbora itself but Fantomah paralyzes the monsters, then picks up Mundoor and has the giant lizards follow the two of them back to the asteroid. She strands Mundoor on the asteroid with his monsters and then causes it to fly back into outer space for good.

Locale: The River of Emeralds, a body of water in Fantomah’s domain.

Villain: The Jungle Demon, a sort of “evil Tarzan” who was orphaned as a child and raised by a gigantic boa constrictor.

The Tale: Fantomah observes the now-adult white orphan feed on Devil-Berries beside a stagnant pool of water. The berries drive him crazy and he begins riding around on his enormous boa constrictor pal called Powerhouse. He and the snake prey on animals and natives alike with Powerhouse eating all of the pair’s victims. When the Jungle Demon eats secret roots and herbs he gains super-powers and plots to depopulate the entire continent.

The Mayhem: With entire villages and cities of natives now fleeing at the mere approach of the Jungle Demon and Powerhouse our power-crazed villain takes to striking down scores of natives and causing them to writhe in pain. He enslaves them and forces them to dredge up all the emeralds that line the long bottom of the River of Emeralds itself.

Fantomah finally intervenes, freeing the natives from the Jungle Demon’s control while she attacks Powerhouse. She punches him and shoots lightning bolts from her hands for awhile before defeating him. Next she flies off with the Jungle Demon and cures him by having him eat medicinal leaves. She cures Powerhouse the same way and then forgives them both, exiling them to a deserted canyon in the jungle for their own and everyone else’s safety.

Locale: The Chasm of Diamonds and the Secret Pit of Jungle Horrors.

Villains: Back to nameless villains, in this case a virtual army of white guys intent on plundering all the diamonds from the hidden Chasm of Diamonds.

The Tale: The army of Diamond Plunderers, observed by the ever-inscrutable Fantomah, raid a village and enslave the natives. They have their captives lead them to the Chasm of Diamonds where, over the course of several days, they force them to mine diamonds for them.

The Mayhem: Once again waiting until the mood strikes her to intervene, Fantomah just continues watching events unfold. An outside corporation of white guys (Mervis Diamonds for all I know) who have tried to claim the Chasm of Diamonds for themselves to mine have gotten an unnamed government to send in an air force to drive out the Diamond Plunderers.

The Plunderers use their anti-aircraft guns (they came prepared) to shoot down all of the attacking planes, but the natives escape in the confusion. When the villains try to round them up again Fantomah at last takes action. She toys with the Plunderers and laughs at their attempts to shoot her down like they did with the planes.

Tiring of that sport she levitates the Diamond Plunderers and flies them to the Secret Pit of Jungle Horrors.  This “pit” is really a deep canyon where Fantomah condemns the villains to be slaves of a monstrous humanoid race from deep in the Earth. Trying to escape, the Plunderers fall prey to giant monsters who emerge from the rock cliffs, to enchanted whirlwinds, and to a dozen or so white cobras. Satisfied, our heroine flies off.