For the Thanksgiving holiday Balladeer’s Blog is focusing on bad movies and hilariously lame educational shorts that have a specific Thanksgiving theme. As always my Bad Movie page contains full-length reviews of the films I’m offering a brief synopsis of here.

BLOOD FREAK (1972) – This movie is about a man who turns into a murderous monster with the head of a turkey after he eats a chemically treated gobbler at the turkey farm where he works. Blood Freak has been a cult classic for Thanksgiving for decades now, with many Movie Host shows of the late 70’s onward making a point of screening it at this time of year (including The Texas 27 Film Vault). The biker who turns into the blood-crazed turkey monster is an Elvis look-alike which adds to the fun. So does the desk-bound, chain-smoking, script-reading narrator who sermonizes about the evils of drug abuse while the movie plays. FOR MY FULL-LENGTH REVIEW CLICK HERE: https://glitternight.com/2011/11/23/thanksgiving-eve-bad-movie-treat-the-turkey-monster-movie-blood-freak/

A DAY OF THANKSGIVING (1951) – This 12 minute educational short would make a nice dessert after a Turkey Day screening of Blood Freak. The Johnson family – composed of Mom, Dad, Dick, Susan, Tommy and the toddler Janet – can’t afford a turkey for Thanksgiving. The children are at first callously (and comically) bratty about it, but relent after Dad – in his sexiest voice for some reason – gives the kids a lecture about being grateful for what you have instead of obsessing over the things you don’t have.

The children’s attitude does a 180 from “Even the pilgrims had a feast” (with an implied “dammit” after it) to cheerfully throwing off the shackles of eating turkey on Thanksgiving Day. Free from their bourgeois preoccupation with fowl the Johnson family says a mealtime prayer expressing gratitude for “washing machines and hot water out of the tap” for “public libraries and cookies and milk after school” and other things. The whole scene is accompanied by angelic choral music composed by the producer Art Wolf.

Slasher in the House

SLASHER IN THE HOUSE (1981) – The Thanksgiving entry in the 1980’s trend toward slasher films to fit every holiday on the calendar. Jake “Body by Jake” Steinfeld plays a psychotic killer who escapes from an insane asylum on Thanksgiving and begins racking up a body count by preying on a large and hilariously dysfunctional California family celebrating the holiday. Every victim of Steinfeld’s rage – which is enhanced by the PCP he injects under his tongue – could win a Darwin Award for their sheer stupidity, which is monumental even for people in a horror film. This one is not as comically bad as Blood Freak, but provides a wealth of fun for people who love dissecting all the groan-inducing cliches of 1980’s slasher flicks. FOR MY FULL-LENGTH REVIEW CLICK HERE: https://glitternight.com/2011/11/24/thanksgiving-day-bad-movie-slasher-in-the-house/

DINING TOGETHER (1947) – This 10 minute short is from an outfit called Children’s Productions and it plays like children were on BOTH sides of the camera. Two robotic little boys prepare for Thanksgiving Dinner by polishing candle holders, setting the table and dressing up for job interviews from the looks of the suits they put on. In addition they hold chairs for the female guests as they sit down to dinner (their parents obviously don’t want children – they want maitre’d’s), praise their mother’s cooking with the insincere air of the brainwashed soldiers praising Lawrence Harvey in The Manchurian Candidate and otherwise behave like automatons.

The syrupy narration praises them for eating their soup course ( at Thanksgiving Dinner?) without making noise. “We are glad we have good table manners”, the narration continues, “Good manners make people happy, and good table manners make eating together a happy time.” Enjoyably enough, the narration is often drowned out by the overwhelming piano music on the soundtrack. Typical of these educational shorts the entire enterprise plays like it was produced by emotionless aliens trying to approximate human behavior.

Just keep telling yourself .. it’s only a tv special.”

THE STAR WARS HOLIDAY SPECIAL (1978) – This infamous special was disowned by George Lucas who has claimed he’d like to track down and burn every bootleg copy. You’ll be longing for a character as complex as Jar Jar Binks as you watch this hilariously bad special that aired Thanksgiving week of 1978. Life Day is apparently the equivalent of Thanksgiving in the Star Wars universe, and Han Solo is trying to elude Imperial forces to get his pal Chewbacca home in time for the holiday festivities.

No brief description can do justice to this cosmic bomb so you may want to seek out my full-length review on my Bad Movie page. Suffice it to say Harrison Ford and Mark Hamill seem ready to die of embarrassment as they force their way through this incomprehensible mess, a condition avoided by Carrie Fisher because she supposedly claimed she was coked out of her mind during the filming. You’ll feel like you’re on something, too, as you watch this travesty featuring Wookie Porn, music videos, cartoons, cooking shows and much, much more. You’ll also learn that Bea Freaking Arthur is the owner of the Mos Eisley Cantina and that the Star Wars theme has LYRICS! FOR MY FULL-LENGTH REVIEW CLICK HERE: https://glitternight.com/2011/09/05/special-guest-commentator-kara-laird-reviews-the-star-wars-holiday-special-1978/ 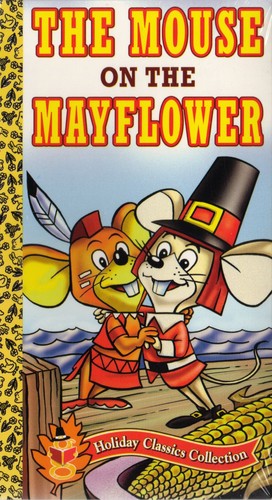 From the people who brought you The Titmouse on the Titanic

THE MOUSE ON THE MAYFLOWER (1968) – Country western star Tennessee Ernie Ford narrates and supplies the voice of the title character – a Puritan mouse named Willum – who stows away on the Mayflower during its trip to America. The little rodent (and coincidentally enough “little rodent” is also Michelle Obama’s pet name for Barack) also gets to participate in the first Thanksgiving celebration with a Native American mouse. Their same-sex relationship is a moving plea for tolerance set against the backdrop of the Pilgrims and the Native Americans coming together to share a feast and give thanks. Okay, the same-sex relationship element is purely an assumption on my part, but still …

At any rate this cartoon, which COULD have been a holiday classic, is horrendously boring and I doubt 21st Century children will even sit through it. If the tale had been set in a half-hour timeslot instead of an hour it might have been more watchable. As it is it’s a challenge to endure even if you’re desperate for a Thanksgiving cartoon version of the Grinch and all the other Christmas cartoons.

8 responses to “TURKEY DAY: BAD MOVIES AND SHORTS FOR THANKSGIVING”