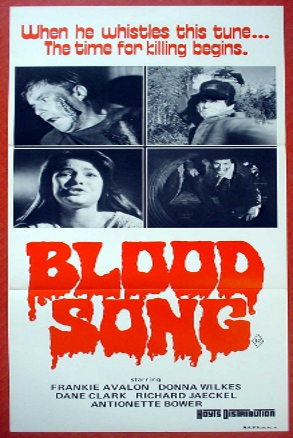 Halloween month continues here at Balladeer’s Blog! In previous years I’ve run my list of The Top Eleven Neglected Bad Movie Classics for Halloween and even a followup list of eleven more. The links to those lists are below. Right now here’s a look at three more classically bad horror flicks for the season.

BLOOD SONG (1982) – Singer Frankie Avalon as a 1980’s- style slasher villain! The godfather’s Luca Brasi (Lenny Montana) as a co-star and co-producer! Who could possibly resist that? Frankie plays a homicidal maniac who escapes from an insane asylum with his beloved flute/recorder type thingee.

Turns out years earlier a girl played by Donna Wilkes – soon to star as Angel herself – got a blood transfusion from Psycho Frankie. In this movie’s logic-free universe that means that she has a mental link with our mad slasher. This link is causing him to track her down to kill her with the single-minded fury that Mike Myers showed toward Jaime Lee Curtis in the Halloween movies.

The psychological link with Donna is also causing her to have nightmares about the savage slayings that Avalon commits wherever he goes. Paul Foley (Avalon’s character) tends to kill people who get irritated with the “Blood Song” he plays on his flute/recorder thingee and tell him to knock it off. My favorite killing: the one with the trucker taking a leak. Hey, it’s no “Santa at the urinal” scene from Don’t Open Til Christmas, but then what is? 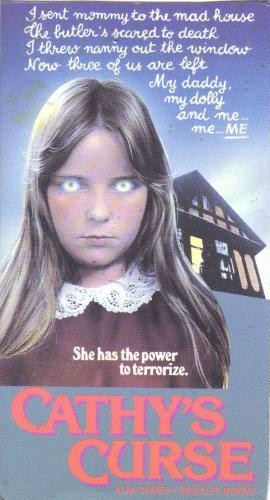 CATHY’S CURSE (1977) – The four words that make lovers of bad movies smile even more than “directed by Ed Wood” are “Canadian Tax Shelter Movies”! Cathy’s Curse is another one of those north-of-the- border gems. This little honey stars nobody and features a little girl named Cathy being possessed by her late aunt when she, her father and step-mother move into the aunt’s old house.

Cathy gets supernatural powers from her dead relative and those powers manifest themselves in hilariously cheap and lame special effects scenes that are like stop-motion student films, only worse. Even for a horror film all the characters behave in stupid ways that will have you laughing your ass off through most of the running time.

Inane supporting characters provide lots of fodder for Cathy’s killing spree and the original dialogue was in French so viewers get the Old School bad movie fun of the actors’ lips NEVER matching up with what they’re saying. Even better is the fact that they apparently did NO retakes. Muffed blocking and uncooperative props co-star with our cast of unknowns. 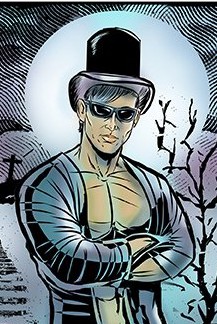 Watch for the scene with the man trying to break down a bedroom door to get at Cathy. The filmmakers failed to lock it so our hero unintentionally succeeds in bursting the door open even though the scene clearly called for him to be unable to. To compensate our Master Thespian simply PULLS THE DOOR CLOSED AGAIN, hopes the audience didn’t notice and  continues pretending to throw his shoulder against it over and over to try to open it. AND IT’S ALL LEFT IN THE FILM! Cathy’s Curse is the BEST bad movie on this list, trust me. 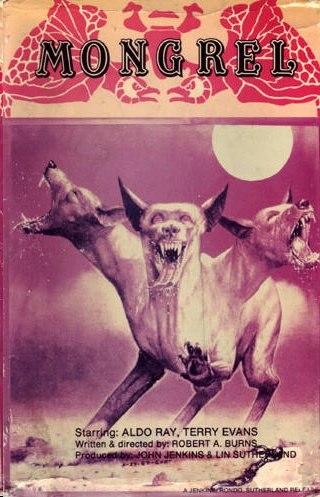 MONGREL (1982) – Buy this horror film for the X-Files fan in your life! It’s A.D. Skinner as you’ve never seen him before! Mitch Pileggi plays Woody, a redneck whose behavior is so hickish he makes the stars of Duck Dynasty look like the members of the Algonquin Roundtable. When he’s not acting like a general jackass Woody is cupping his girlfriend’s boobs from behind and calling them “my tomatoes”.

Woody is the maintenance man at a boardinghouse full of the biggest pack of losers and misfits this side of films like Boardinghouse and The Dead Talk Back. The other weenies at the boardinghouse include a shy recluse, a would-be stud, a “normal” woman the men lust after, a retired military man, a sycophant called Toad and Woody’s aforementioned girlfriend Turquoise (played by Rachel Winfree, who would appear with Pileggi years later on an X-Files episode).

Aldo Ray of all people also appears as the owner of the boardinghouse where all the horror takes place. The military man’s aggressive and huge mongrel dog gets loose and mauls one of the tennants, following which the animal is killed. The other tennants start to turn up dead, too, all victims of apparent dog attacks.

Is the slain mongrel back from the dead? Is the attacked tennant turning into a were-dog? Is the military man killing the others to avenge his slain dog? Is there another deadly mutt in the vicinity? You’ll figure it all out long before the cast members do but that won’t stop you from laughing all the way to the “out of nowhere” ending.

FOR MY ORIGINAL LIST OF NEGLECTED BAD MOVIE CLASSICS FOR HALLOWEEN – https://glitternight.com/2011/10/24/the-eleven-most-neglected-bad-movie-classics-for-halloween/