Once again I’ll say that a young Bruce Campbell would have made a perfect G-8 in a television series! 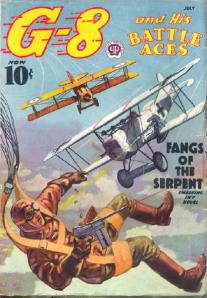 58. FANGS OF THE SERPENT (July 1938) – Introducing  the German intelligence agent known only by the codename the Serpent. Kaiser Wilhelm himself gives the Serpent his latest mission: to destroy G-8 and his Battle Aces. A-1, Hogan’s fictional head of American Intelligence, personally warns our hero about this new adversary’s abilities.

The Serpent, like plenty of other G-8 villains, sports a memorable disfigurement. In his case a twisted spine from which he gets his codename and his distorted posture.  That would be a detriment to his career as a spy if not for the fact that his real strength lies in his supernatural mastery of the art of hypnosis.

This latest menace to face our heroes plots to fulfill his commission from the Kaiser by way of supreme irony: the Serpent hypnotizes G-8 and uses him as an agent provocateur to destroy the Battle Aces and then himself. Along the way the Serpent also implants post-hypnotic commands in the mind of German flying aces like Baron von Kiel, who, when shot down and sharing a drink and meal with his vanquisher G-8, attempts to kill Bull and Nippy per those commands. 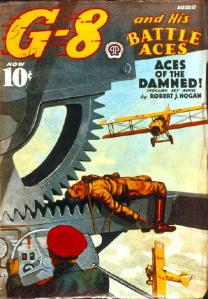 59. ACES OF THE DAMNED (August 1938) – Chu Lung returns! In general I find the sinister Chinese genius Chu Lung to be a cheap imitation of both Fu Manchu AND Robert J Hogan’s Wu Fang, the title character of one of the short-lived supervillain pulps.

This time around the deadly Chinaman, betraying his country by working for the Central Powers, has created a customized Twin Zeppelin unit that soars the skies linked together by an array of special weaponry that shoots chemicals that induce blindness in Allied pilots and ground troops, leaving them helpless before the advancing Central Powers troops. It’s up to G-8, Bull Martin and Nippy Weston to save the day and prevent the war from being lost. And look for an appearance by Arabella Hawkins, Battle’s longest- lasting girlfriend!

At one point in this thrilling adventure G-8 battles some of Chu Lung’s Chinese henchmen on the gun platform of the flying menace, a few thousand feet in the air. Chu Lung uses another elaborate death-trap for G-8, positioning our hero so that he’ll be crushed by the massive gears of his huge blind-gas cannon as it fires on the Allied troops below. What, no sharks with laser beams shooting from their heads?

60. PATROL OF THE SKY VULTURE (September 1938) – It’s the third and final appearance of G-8’s foe Herr Geist (“Mr Ghost”), the elusive master assassin. As if Herr Geist’s own stealthy, ninja-like abilities weren’t difficult enough to deal with, he’s been issued a super-scientific weapon to wield against G-8 and company.

From his hidden base in the Vosges Mountains Geist goes into action, flying his transparent plane and armed with a chemical spray that causes people to vanish! Are his victims gone for good or have they merely been evaporated and teleported to another location? Can our heroes get to the bottom of this new threat before the Central Powers irreversibly change the tide of the war? What do you think?

And believe it or not, Herr Geist really IS dead for good this time around come story’s end.

6 responses to “PULP HERO G-8 AND HIS BATTLE ACES: STORIES FIFTY-EIGHT TO SIXTY”