Voodoo mythology is a fascinating hybrid of Yoruban, Dahomey, Fon and Christian mythology intermixed with touches from Caribbean belief systems. Haiti is the central location of the Voodoo belief system but naturally it has spread throughout the world as have other faiths.

Let me point out that I will use “Voodoo” as the catch-all name, even though to purists Vodou is the Haitian version and Voodoo is the form of Vodou practiced first in New Orleans and then throughout America. 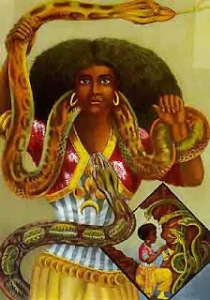 AYIDA – The goddess of the rainbow and the primary wife of the creator deity Damballah. The pair often manifest in the skies over Haiti as intertwined serpents. Ayida also serves as a fertility goddess. Her favorite color is white as reflected in her favorite offerings: white chickens, white eggs, rice, milk and cotton. Her daughter is Ayizan, the goddess of the marketplace and of initiation into the sacred truths, making her the head Mambo (Voodoo priestess).

MARINETTE – Demigoddess who in her mortal life was the Mambo who sacrificed a black pig at the start of the First Haitian Revolution. After dying as a martyr to the cause Marinette rose to godhood as the patron deity of liberation AND slavery, oddly enough. She can bequeath freedom or a return to bondage. Marinette is depicted as an emaciated woman who afflicts those she possesses with violent, angry fits. Owls are her familiars and she is the protectress of werewolves. Black pigs and black roosters are sacrificed to her.

KALFU – The moon god and ruler of the night. He is the patron deity of sorcerors, especially those who practice black magic. He also has lordship over charms, bad luck, destruction and all manner of injustices. Those possesssed by Kalfu display dark eyes and shed black tears. Kalfu’s favorite drink is rum laced with gunpowder. He is often seen as a dark version of Legba.

ZACA – The god of agriculture and the harvest, making him the patron deity of farmers and fieldworkers. Zaca is the friendliest and most approachable of the gods and may be addressed as “Cousin Zaca” if spotted in the fields. He dresses in denims and a straw hat just like the rural Haitians do. In addition Zaca smokes a pipe, drinks from bottles of rum and wields a machete. His holy day is Haitian Labor Day on May 1st.

LOCO – The god of wild vegetation with all its gifts, from fruits to herbs for healing and poisons for killing. By extension he is also the patron deity of doctors and of Houngans (Voodoo priests). His wife is the goddess Ayizan. One myth involves Loco’s discovery of the god Nibo as a stone wrapped in swaddling cloth. Loco took the stone home where it turned into a child. He had the child baptized with the god Ogun serving as godfather. Nibo’s anus produced cinammon but he is most celebrated for his role as one of the death-gods, or Ghede.

LEGBA – The sun god and intermediary between the gods and humanity. He speaks all human languages and is always the first god or loa to be invoked in Voodoo ceremonies. It is through Legba that loa move back and forth from the realm of the gods in Guinee to the mortal world to possess worshippers. He holds the key and guards the doorway and the roads between the two worlds. By extension he is viewed as the god of all gates and crossroads. Legba is considered the “good” counterpart to his dark twin Kalfu. Despite his power Legba is depicted as an old man walking with a crutch or cane for support. All dogs are sacred to him. 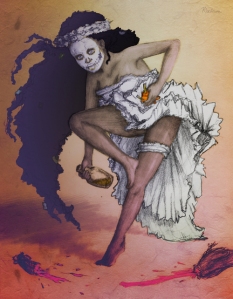 MAMAN BRIGITTE – This foul-mouthed goddesss is one of the most powerful of the thirty Ghede, or death-gods. Her husband is Baron Samedi and like him she guards over cemeteries with her special province being graves topped with piles of rocks. She is also considered the goddess of justice. Rum and hot peppers are Maman Brigitte’s diet, with the hot peppers believed to account for her association with fire. A figure representing this goddess is the first female buried in every Voodoo cemetery.

OGUN – Often called the Voodoo Hercules, Ogun is the god of war, iron, fire, metalworking, politics and technology. Ogun is believed to have come down to fight in every war in Haiti’s history in various human guises. His symbol is a sword stuck upright in the ground. Those possessed by Ogun can wash their hands in burning sugar-cane without feeling any pain. When those thus possessed are thirsty for rum they make with the Haitian soldier’s cry of “My testicles are cold” (I want that on a t-shirt, dammit ).

Ogun stood as the Ghede Nibo’s godfather and adopted him, prompting a rivalry between Nibo and Ogun’s own son Ogubadagri. If both those deities possess worshippers at the same Voodoo ceremony a fight is sure to break out between Nibo and Ogubadagri. Another belief system in which the deities frequently possess their worshippers and disrupt ceremonies with their feuds would involve the gods of Rennell Island and Bellona Island. CLICK HERE

AGWE – The god of the sea and of both plant and animal sea-life as well as the patron deity of sailors and fishermen. Agwe taught humans how to fish and build boats. Elaborate ships are built and loaded with offerings, then pushed out to sea with holes in the bottom to allow the ships to sink and present Agwe with the gifts. Agwe lives in a sprawling plantation under the sea and is one of the husbands of the love goddess Erzulie.

Agwe is green-eyed and dresses like a naval officer. Agwe’s subordinate water deities include: Adjassou the goddess of spring-water; Labaleen the goddess of whales and Clermeil the river-god who was responsible for floods. Mamiwata was originally Agwe’s wife and a co-ruler of the sea but later she was conflated with Erzulie.

ERZULIE – The goddess of love, beauty and passion. She wears three wedding rings in recognition of her three husbands – the gods Ogun, Agwe and Damballah. Erzulie’s three husbands pamper her and provide her with a lavish and luxurious existence, an idyllic life broken up only by the sadness the goddess feels because of broken hearts among humans.

The goddess is always powdered and perfumed and adorns herself with all manner of jewelry. Erzulie has affairs with many gods besides just her husbands but always rejects Nibo because of his excessively dark skin. She enjoys sugar-cakes and champagne and a sudden desire for these things can mark a mortal woman as possessed by Erzulie.

DAMBALLAH – The most well-known Voodoo deity with the world at large, exceeded only by Baron Samedi perhaps. This serpent god who encircles the Earth was also the creator of human beings and gods and controls intelligence and the life-force. When he is not depicted encircling the Earth or intertwined with his wife the rainbow goddess Ayida, Damballah is shown living among the branches of the Sacred Tree.

Damballah looks after cripples, the deformed, albinos and young children. The snake god loves the precious metal silver and if worshippers find favor with the god he rewards them by leading them figuratively or literally to Earthly riches.

Those mortals possessed by Damballah do not speak but merely hiss like snakes. A son of Damballah is Simbi, the white snake-god who brings rain.

171 responses to “THE TOP ELEVEN DEITIES IN VOODOO MYTHOLOGY”