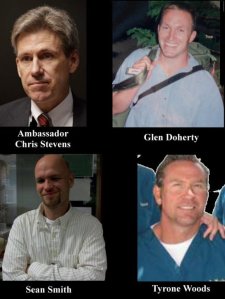 Last night’s episode of the hit cable series Twenty-First Century Golem (about Jewish mythology’s clay monster the Golem having adventures in the present-day) was scratched and a rerun aired in its place after the Obama administration declared that the subject matter – the Golem getting mixed-up in battles with the terrorists behind the attack on America’s diplomatic compound in Benghazi – might inspire violence in the Muslim world. “The producers are lucky their asses aren’t in jail” Obama quipped.

It was a reminder about how Obama lied when claiming that a youtube video that displayed irreverence to Islam caused the 9-11 anniversary attack on the U.S. compound in Libya back in 2012. All the evidence that has come out since then indicates that Obama intentionally lied to spare himself embarrassment and inconvenience during his reelection campaign, fearful that the well-planned Benghazi attack would expose yet another of his administration’s lies: that Al Qaeda was supposedly “on the run.” (Tet Offensive, anyone?)

In an exclusive statement to Balladeer’s Blog Obama had this to say:

“C’mon, Eddie! You know as well as I do that I ordered this done to keep Benghazi out of the headlines as much as possible! Thanks to how stupid the Republicans were in falling hopelessly behind the Democrats in the media arms race virtually nobody in the nation even knows there is a House Select Committee looking into my Benghazi lies. Hell, the latest evidence that surfaced against me should have been enough to have the whole country howling for an explanation from me, but since relatives and friends of various people in my administration work at the major networks the whole issue keeps being ignored.

“That’s a level of sophistication that America’s pathetic excuse for an opposition party lacks. Even if the clueless and inept GOP DID get lucky and co-opt most media outlets by making them a social and professional extension of their next presidential administration they’d cave in at the first negative news story about the appearance of impropriety and disband the whole setup. Or the first time some sketch comedy show made fun of them! Hell, my personal pussy John McCain would probably lead the charge against his own party!

“Anyway, my greatest asset continues to be the two-party system! As long as Americans are stupid enough to think the only choices are between the Democrats and the culturally impotent Republicans I’m sitting pretty! Even those people who ARE disgusted with my administration look at the outdated and hopelessly outclassed Republican Party and keep a shrewd distance from them! The country would probably be better off if the Republican Party had just died already, then the Democratic Party would probably split in two between the fanatical Political Correctness faction and the Reasonable Adult faction.

“Luckily the major parties are so thoroughly grafted onto the body politic that won’t happen. And since Americans have this strange notion that third parties are not viable I look forward to a future of the same old shit: us accusing the Republicans of being racists and misogynists (while ignoring the abuses that Islam is responsible for) and them blustering meaningless bullshit about Family Values and the dangers of Socialism and Communism.

“It’s impossible to take the opposition seriously when they go on thinking they can get by with just Fox News Channel and talk radio while we have the entire rest of the media as a virtual house organ! I’ll close by saying you should do more big boob features and fewer looks at how crooked my administration is. I can’t get enough of your Neo-Pulp heroines Mordillo Blush, Charity Bloodworth and the Matriarch! ”

FOR MORE ON WHY I DESPISE AMERICAN LIBERALS AND CONSERVATIVES CLICK HERE: https://glitternight.com/category/liberals-and-conservatives/