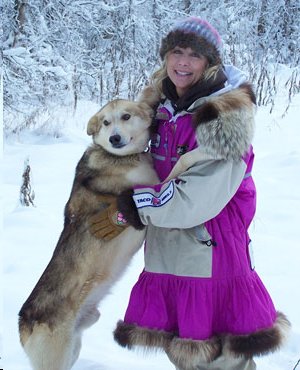 Balladeer’s Blog throws it back to my sister Rosemary, Glitternight.com’s Official Iditarod Correspondent for another look at a participant in the 2014 Iditarod Dogsled Race. This time the featured Musher is DeeDee Jonrowe, Official Balladeer’s Blog Nickname: “Juneau” Jonrowe. Now over to Rosemary:

Today I am going to write about another of my favorites of the veteran women mushers…DeeDee Jonrowe.
According to her official biography on the Iditarod website http://iditarod.com/race/2014/mushers/95-DeeDee-Jonrowe/  , DeeDee Jonrowe, 60, was born in Frankfort Germany while her father was in the military. The family moved to Alaska in 1971.

DeeDee has a B.S. degree in Biological Sciences and Renewable Resources and now lists her occupation as kennel owner and dog racer. She began mushing in 1979. She says, “Participating in the Iditarod has become my life’s passion. I begin training the day my pups are born, with my focus to provide each of my dogs a long, safe and successful career. I have helped to develop state-of-the-art nutrition, sports therapy, and training plans, working year around to develop a well-rounded life style for my dogs.

DeeDee’s husband is named Mike , and he is the secretary of the Iditarod’s Board of Directors.

Hope everyone takes a look at the history behind the race and I hope you will come to love and enjoy it as much as I do.

FOLLOWUP: Unfortunately DeeDee was forced to scratch out of the race today after her sled suffered severe damage in an accident. DeeDee and her dogs are fine.