It! The Terror From Beyond Space

Before MST3K there was The Texas 27 Film Vault! Balladeer’s Blog continues its examination of this neglected cult show from the 1980’s. Randy Clower and Richard Malmos, our machine-gun toting members of the Film Vault Corps (“the few, the proud, the sarcastic”) do their usual bit of showing and mocking an old serial then showing and mocking a bad movie.

Thanks to my interview with Randy Clower, the show’s co-creator and co-star and thanks to my research through VERY old newspapers plus emailed memories from other T27FV fans I’m taking a look at another episode of the show where an exact broadcast date can be determined.

SERIAL: Before the night’s movie Randy and Richard would often present old serials. In this episode of the show our “Film Vault Technicians First Class” showed an episode of the 1950 Columbia serial Atom Man vs Superman to be mocked. Kirk Alyn starred as Superman with Lyle Talbot as his archenemy Lex Luthor. Lex has his own secret identity in this serial – each episode he dons a lead mask and oversees the villainy as “Atom Man”.

This was one of the liveliest and most campily watchable serials of the 50′s. Especially laughable are the bits when Superman “flies” – an effect achieved by switching from live footage of Kirk Alyn to INSERTED CARTOON FOOTAGE of Superman flying. Think of the ‘Toons in Roger Rabbit interacting with the live backgrounds and you have the idea.

FILM VAULT LORE: This episode of The Texas 27 Film Vault was the first to come with a Viewer Discretion warning. Gore effects fans (And what T27FV fan WASN’T a gore effects fan?) were in Nirvana this night as Film Vault Corps member Joe “The Hypnotic Eye” Riley was given full reign for some of his most graphic effects work during the comedy sketches or Host Segments if you prefer.

Direct from the Film Vault Corps Academy in Leadville, Colorado, the Academy’s Little Theater Group was touring Film Vaults across the country. Tonight they were performing on Level 31 of the Film Vault underneath Dallas, where the show was set. The Little Theater Group was reenacting scenes from famous alien monster movies and since It! The Terror From Beyond Space was a partial inspiration for the original Alien, the chest-burster scene was reenacted in darkly comic glory! (As if the chow in the Film Vault Commissary wasn’t unappetizing enough already!)

THE MOVIE: It! The Terror From Beyond Space is one of the consummate low-budget schlockers of the 1950’s. It embodies the “so bad it’s good” aesthetic that so many Movie Host shows have always reveled in. In the far-off year 1973 (LMAO) a very fake-looking space-ship on an even more fake-looking matte-painting of a Martian landscape has come to rescue the sole survivor of the previous mission to the Red Planet. (So far it sounds almost like Queen of Blood, shown on T27FV in May of 1986 and reviewed previously)

The sole survivor of the first mission, Colonel Edward Carruthers (Marshall Thompson) is suspected of having killed all his crew-mates. In reality a Martian monster (our title menace) slipped aboard Carruthers’ ship and killed off the crew. That same creature stows away on the rescue ship and on the journey back to Earth begins killing off the new crew, clearing Carruthers. After a running battle throughout the ship the few remaining crew members slip into their pressure suits and open the airlock to kill the monster.

To cite just a few of the many laugh-inducing moments from the film:

* The terrible special-effects for the dead bodies of the monster’s victims, all drained of moisture and bone marrow.

* The way the crew members casually SMOKE on the spaceship. 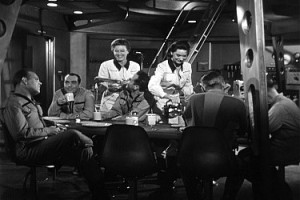 * The inept crew member who leaves an exhaust vent wide open, allowing “IT” to sneak onto the ship.

* The “shades of Alien” moments when the monster drags its victims into air ducts.

* The countless external shots of the spaceship traveling through space, simulated by showing the cardboard model go up, up and away until out of the shot each time.

* The lawn chairs that serve as furniture on the spaceship.

* Obvious radio equipment serving as the control panel of the ship.

* The crew’s reckless tendency to let loose with gunfire and even GRENADES aboard the ship when fighting the monster.

* The aftermath, where Earth’s authorities decide that the presence of hostile life forms on Mars means they will BYPASS MARS and instead explore other planets in our solar system! Yeah, who wants to bother studying the first-found examples of alien life anyway.