BAD MOVIE – PULGASARI (1985): THE MONSTER MOVIE MADE BY THE LATE KIM JONG IL 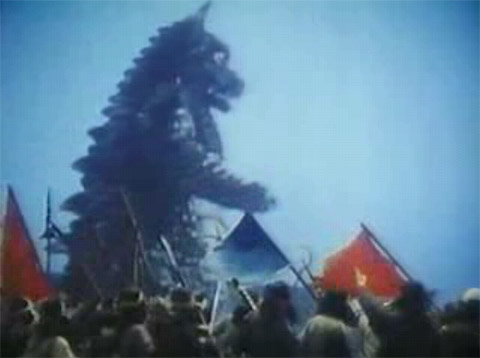 Kim Jong Un has North Korea in the news again for all the wrong reasons. He’s continuing his insane and despotic family’s policies like starving his own people, constantly threatening nuclear activity against other nations, having his secret police abduct countless people in the middle of the night and running a barbaric prison system.

So here’s a helping of my review of the lone venture into the area of filmmaking that Kim Jong Un’s equally crazed father Kim Jong Il engaged in. Of course I’m talking about Pulgasari, the only kaiju movie produced by a man who combined the insanity of Idi Amin with the paranoia of Josef Stalin and the cinematic mastery of Ed Wood.

PULGASARI (1985) – Category: Bad enough and with a classically weird premise but not fun-bad enough for my highest rating     North Korea’s thoroughly deranged dictator Kim Jong Il was responsible for this film and even gives himself a producer’s credit. It’s the least he could do for himself after having his underlings literally KIDNAP SOME FILMMAKERS from South Korea and forcing them to take part in this bizarre film venture. If you doubt me just use a search engine to find out about the making of this movie. He even made those unfortunate people rot in one of his prisons for four years before he finally got around to setting them to the task he had kidnapped them for in the first place.

kaiju monster film market. (Their previous attempt decades earlier resulted in the equally laughable film Yongary, Monster From The Deep ) The story of the kidnapping and the filmmakers’ subsequent escape would have made a much better movie than this monster flick.

Pulgasari (No, Dennis Rodman, not Pao Gasol, Pulgasari. NBA fans will get it) is the title monster in Kim Jong Il’s attempt to imitate Godzilla and Gamera and other Japanese monsters. Since the story is set centuries ago it also has overtones of the lesser known Japanese monster movie series about Majin, the giant stone samurai who comes to life and kicks butt in feudal Japan. Majin  for some reason also shoots flame from between his legs. No, I’m not kidding.

Crotch-mounted flame throwers might have helped liven up Pulgasari, which is very boring in stretches because of the inane, heavy-handed, Kim family-aggrandizing message of the movie. Pulgasari starts life as a toy lovingly crafted by an elderly man who has been jailed by the local tyrannical feudal lord. This man dies due to ill-treatment by his captors and as everyone who’s ever seen an episode of Twilight Zone or Tales From The Crypt or any other anthology series could predict, the lovingly crafted toy comes to life to avenge its creator and save the down-trodden villagers he loved.

The toy has a huge hunger for iron, and as he eats more and more of it he grows larger and larger until he is several stories tall and can go on a rampage to take on the brutal armies of the oppressive feudal lord. Like in the Majin movies, the time period means instead of lame miniatures of a  skyscraper- filled metropolis being defended by tanks and planes we have lame miniatures of a period town being defended by cannon. Have no fear, though, Pulgasari himself looks every inch the sweaty guy in a big rubber monster suit that Godzilla himself did in movies back then.

Anyway, as the film ham-fistedly goes on to make clear, Pulgasari actually represents the “evil forces of capitalism” pretending to save “the people” from oppression only to go on to oppress them still further. This flick is as laughable with its simple-minded left-wing message as the movie If Footmen Tire You What Will Horses Do? (qv) was with its simple-minded right-wing message.

The monster requires more and more mineral sustenance from the villagers to keep its dictatorial reign going. Naturally, as you would expect, a heroic figure who hilariously is supposed to represent THE KIM FAMILY in Kim Jong Il’s fevered mind, arises to bring down the evil Pulgasari and be the true savior of “the people”. Nice revisionist myth- making by a crazed dictator to justify his family’s ongoing rape of the country they rule over. Everybody who loves laughing at bad  monster movies and pee-pee- ca-ca level political messages should see this movie.