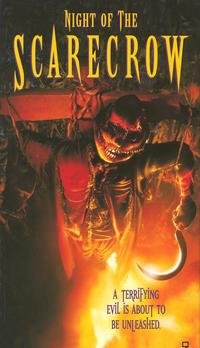 Night of the Scarecrow

With Halloween almost here the seasonal posts here at Balladeer’s Blog are increasing in frequency. This time around I’ll examine four neglected horror films that are thoroughly macabre and are certainly graphically gruesome enough for today’s audiences but for some reason don’t have the followings they deserve.

4. NIGHT OF THE SCARECROW (1995) – A big reason for this film getting lost in the shuffle is no doubt the fact that it is frequently confused with Dark Night of the Scarecrow, a telefilm with Charles Durning. This flick is in a whole different category. A warlock in 1600’s America is killed by the holy roller townspeople, with his soul being trapped in a scarecrow and his bones buried in a coffin beneath that scarecrow.

In the 1990’s an accident revives the warlock’s soul and unbinds the scarecrow, which sets out for revenge on the descendants of his killers. The scarecrow spent hundreds of years feeling the agony of having a straw and cloth anatomy and gleefully inflicts tortuous physical damage on his victims that is far more sadistically creative, gory and memorable than the overrated Cenobites inflict in any of the Hellraiser movies. I’ll spare you graphic descriptions but suffice it to say a death by having one’s orifices sewn shut is the mildest fate suffered by the scarecrow’s prey.

The direction by Jeff Burr is very well-done and there is a kitsch cast that Fred Olen Ray would kill to assemble: Martine Beswick, Gary Lockwood, Stephen Root, John Hawkes, Bruce Glover and Dirk Blocker offer support to the bland male and female leads who are the movie’s weakest link. As a fan of the Nathaniel Hawthorne story Feathertop I’ve always felt scarecrows are underutilized at Halloween and in horror films in general so I strongly recommend this forgotten film.

From a Whisper to a Scream

3. FROM A WHISPER TO A SCREAM (1987) – Also released under the title The Offspring, this movie is director Jeff Burr’s other hidden gem of a horror film. Martine Beswick is in the cast of this film, too, and she’s joined by Clu Gulager, Terry Kiser, and Cameron Mitchell. This is an anthology movie starring Vincent Price who later disowned the film because of its heavy gore and EXTREMELY dark content.

The various tales in the film are set in the fictional town of Oldfield, where pillar of the community Price shares some dark secrets about Oldfield’s citizens with a visiting lady reporter. So with Vinny P serving as a makeshift Cryptkeeper the anthology’s stories unfold before us. In contrast with movies like Creepshow, Tales from the Darkside: The Movie and others from this subgenre From a Whisper to a Scream never lightens the mood with lame comic relief. There’s a nonstop air of dread in each story and the forces of evil don’t just win – they spike the ball and do the Lambeau Leap into the audience.

Clu Gulager stars in the 1st segment as a lecherous psycho who has an equally demented sister straight out of Whatever Happened To Baby Jane? Clu lusts after his female boss and eventually kills her and then breaks into the funeral home to have sex with her corpse. After killing his sister, too, Clu comes face-to-face with the hellish offspring of his union with a cadaver. (No, it’s not logical but it’s a horror story, so just go with it.) Story 2 is about a small-time hood seeking out a VooDoo priest so he can kill him to attain immortality. This one seems mild at first but has the most horrifying twist ending of the film.

Part 3 presents Rosalind Cash ruling over a bunch of carnival freaks. When one freak wants a normal life Cash uses her powers to bring about an incredibly cruel turn of fate. The 4th tale is about the founding of Oldfield and features Cameron Mitchell as the leader of a band of Civil War soldiers who fall into the clutches of the homicidally insane children who were Oldfield’s blood-soaked founding figures. Vincent Price and the reporter in the wraparound segments go on to supply one final shock to close out the movie. 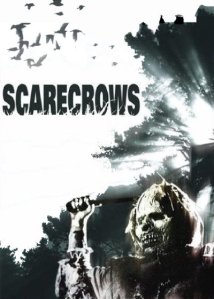 2. SCARECROWS (1988) – Did I mention I consider scarecrows to be underutilized in horror films? William Wesley, who went on to do the horror movie Route 666, directed this criminally neglected film. To me this movie’s quality is enhanced by the fact that the planned sequels never materialized so this underappreciated classic endures as a stand-alone venture. The first sequel was tentatively titled Scarecrows II: The Last Straw, so maybe it’s all just as well no matter how you look at it.

A co-ed gang of criminals have robbed a Marine Corps payroll and are forcing an older pilot and his twenty-something daughter to fly them to Mexico for their escape. When one of the criminals tries to double-cross his cohorts to have all the money to himself the hijacked plane has to make a forced landing at night in a thick, creepy cornfield loaded with dozens of crosses on which are mounted VERY ugly scarecrows. In a Twilight Zone– styled premise the cornfield is a supernatural trap for evildoers who, when they land there, are stalked by the hideous living scarecrows. Those scarecrows don’t just kill their victims they tear out ALL of their innards and stuff them with straw (or in one case the stolen money), turning them into undead scarecrows themselves who will join in the attack on the next group of people who find themselves trapped in the cornfield for punishment.

For years a few very poor quality prints of this film were making the rounds, prompting a lot of undeserved bashing of the flick. Overall this is a very creepy and very violent film with the same sense of nightmarish hopelessness that permeated the original Night of the Living Dead and The Evil Dead. The dark hints at what became of the deranged occupants of the eerie farmhouse at the center of the cornfield stay with you and the overall novelty of the premise makes this a must-see film for the Halloween season … as long as you have a strong stomach. The sunrise shot of our cast members as new scarecrows hanging in the cornfield with all the others is macabre enough for a picture at Deviant Art. 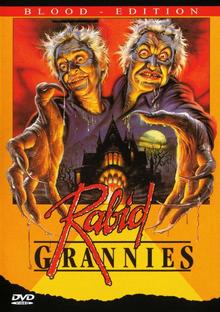 1. RABID GRANNIES (1988) – This review of Rabid Grannies applies ONLY to the original uncut edition, NOT the edited version distributed by the Troma Team. The Troma label on display on recent DVD versions of this movie has made some people dismiss this as the usual Troma goofiness – fun and violent but not much of an actual horror film. Wrong! This Belgian production ranks up there with Italian cannibal movies for gruesomeness and for unflinching violence and gore. The (very) dark humor adds to the overal feel of the flick but it’s not laid on by the gallon like in other indy films picked up for distribution by Troma.

Two sisters in their nineties are celebrating their birthday with a night-time dinner party at their spacious but creepy mansion, surrounded by their greedy, covetous relatives. These grasping relations only make the annual pilgrimmage to try to stay in the ladies’ good graces for the sake of a potential inheritance. The black sheep of the family – a devil-worshipping nephew – sends the elderly sisters a gift that, when opened, transforms the sisters into extremely hideous demonoids who go on a bloody rampage, killing the mansion’s staff, the visiting relatives and their significant others … and their children.

Yes, not even children are safe in this magnificently dark horror film as the transformed women stalk their intended victims throughout the remote mansion. There are plenty of horrific and bloody horror set pieces throughout this unforgettable and ghoulishly enjoyable movie. What the two “Rabid Grannies” of the title do to the priest in the family is nearly unspeakable. If you like fringe horror films you owe it to yourself to see this movie at least once.