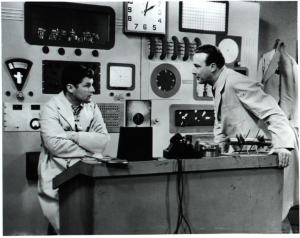 ATOM SQUAD – No relation to Atom 12 (rimshot). This fun and campy science fiction/ spy series hybrid ran 5 days a week from 1953 – 1954 and was one of the many 15 minute-long television shows of the era. Anyone who enjoyed my earlier Forgotten Television Treasure titled Captain Z-Ro will no doubt love Atom Squad.

Scientists Steve Elliot and Dave Fielding ( Robert Courtleigh and Bob Hastings) worked for the title organization and defended America from Commies, mad doctors and extraterrestrials. The Atom Squad specialized in cases involving radiation and atomic weapons so the outdated science and social attitudes on display are a HUGE part of the fun in this relic from the”duck and cover” days.

Elliot and Fielding are sort of the Gannon and Friday of the slide-rule set and are pure “Mom, home and apple pie” compared to their outrageously (not to mention hilariously) nefarious Communist and alien foes. Just like Captain Z-Ro the campy fun of Atom Squad starts right with the opening credits which roll by to the image of a man in a radiation suit stalking toward the camera like the monsters on the old movie host show Professor Cerebus and the Museum of Horrors.

Don’t believe sources who say no kinescopes of this show have survived. There are some out there, but because Atom Squad was serialized in 3 to 5-part stories the episodes available don’t always form complete tales. Think of it like watching those Dr Who episodes from the 1960’s that have episodes before and after them missing.