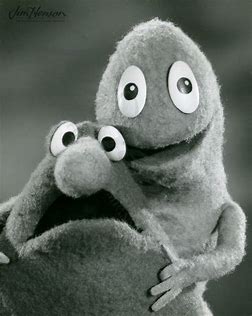 Balladeer’s Blog’s recurring feature Forgotten Television takes a look at some vintage commercials from a future big name. Long before his Muppets would become internationally known Jim Henson presented and voiced a pair of puppets named Wilkins and Wontkins. From 1957 to 1961 the duo appeared in a series of 8-second commercials for a variety of products, just like Jim Varney’s “Hey, Vern!” character Ernest P Worrell decades later. In the 1970s they still popped up from time to time.

Wilkins and Wontkins had a sort of Itchy & Scratchy feel with occasional undertones of Bert & Ernie. Wilkins, voiced by Henson in his future Kermit the Frog style, inflicted bizarrely sadistic punishments on Wontkins for not liking the products they were advertising. 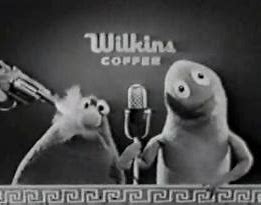 Wontkins sounded like Oscar the Grouch crossed with either Statler or Waldorf and came complete with a Bert-style nose and perpetual frown (and no wonder). Wilkins, on the other hand, looked like a phallic object with arms and a face.

Wilkins had so many Kermit the Frog mannerisms that it adds to the humor of these vintage advertisements. It’s especially dark-humored to see the puppet go through Kermit’s “silent laughter” motions after so many of the casual acts of violence that he inflicts on Wontkins. 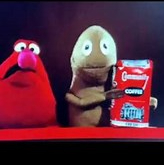 What started as a team of spokes-puppets for Wilkins Coffee morphed into greater things as surely as Barry Manilow’s old commercial jingles paved the way for his singing career!

These Wilkins & Wontkins ads even contain topical references to the Cold War, the Space Race and the Quiz Show scandals! Just watch:       END_OF_DOCUMENT_TOKEN_TO_BE_REPLACED