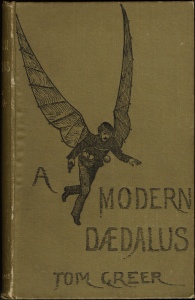 A MODERN DAEDALUS (1887) – By Tom Greer. No, the title’s not referring to James Joyce’s character Stephen Dedalus (sic) but this tale IS about Ireland. The main character is a young man named Jack O’Halloran, a recent college graduate who returns to his native Ireland.

Jack has dreamed about flying since he was a child and now he uses his genius to create a winged apparatus that can be worn by a single person to take to the skies. Our modern Daedalus flies around at speeds of up to 100 miles per hour with his new invention. Jack is thrilled but complications arise when he shares the news with his father.

Old Man O’Halloran wants to use his son’s winged apparatus to wage aerial warfare against the hated British and thereby win independence for Ireland. Our protagonist doesn’t want his invention used for such a blood-soaked purpose and in the ensuing argument his father throws him out of the house. END_OF_DOCUMENT_TOKEN_TO_BE_REPLACED