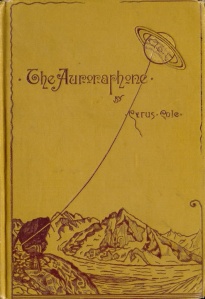 THE AURORAPHONE (1890) – Written by Cyrus Cole. This fun piece of vintage or “ancient” science fiction features the character Gaston Lesage, an eccentric genius who moves to the mountains of Colorado to continue his pet experiments. Lesage is obsessed with perfecting transmission and reception of radio signals, especially regarding potential contact with other planets.

The altitude of the Rocky Mountains made Colorado the ideal location for Lesage’s experiments and, together with his assistant – a freed black man named Pete King – he perfects a device he called the Auroraphone.

One day when Gaston and Pete are entertaining a pair of men prospecting for gold the Auroraphone picks up the first of a series of transmissions from intelligent life on the planet Saturn. In the days ahead Lesage learns a great deal about Saturnian history and science courtesy of his fellow “ham radio operator” Rulph Bozar, a denizen of the ringed planet.

The Saturnians are much more advanced than Earth and already have flying machines, electric automobiles and powerful sensors which let them watch and record events on Earth and other planets. They also have been using metal robots crafted to look just like the Saturnians themselves, who resemble Terrans in general physiology. END_OF_DOCUMENT_TOKEN_TO_BE_REPLACED