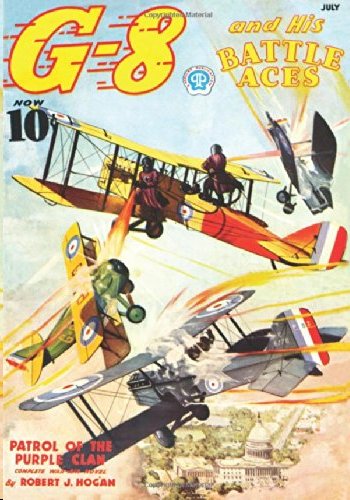 46. PATROL OF THE PURPLE CLAN (July 1937) – Not to be confused with the Purple Empire/ Purple Invasion storyline from the Operator 5 Pulp stories of the time. This tale is entirely unrelated. A squadron of purple-clad flying aces are terrorizing the skies over the United States itself, sabotaging American industry and preying on the population! The Purple Clan, as they’re called, are American traitors happily wreaking destruction throughout their homeland for a price – a fortune in gold being paid to them by the Central Powers.

As the American homefront mobilizes to deal with these attacks on its own soil G-8 and his Battle Aces are hurriedly dispatched to the U.S. on the naval cruiser Madison to help protect Washington D.C. from the airborne marauders. It turns out the leader of the Purple Clan is none other than G-8’s old foe Steel Mask, the deadly German who hid his disfigured face behind a mask of cold steel decades before Doctor Doom and Darth Vader did it. END_OF_DOCUMENT_TOKEN_TO_BE_REPLACED