THE GOSPEL ACCORDING TO SCROOGE (1983) 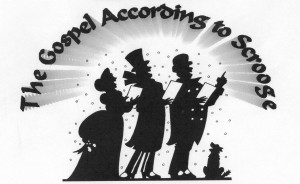 This entry for Christmas Carol-A-Thon 2014 is a true oddity. It’s not so much a “love it or hate it” version of the Dickens classic so much as it’s a “like it or ridicule it” version, due entirely to the forced religious slant.

The Gospel According to Scrooge is a musical adaptation of A Christmas Carol – one which continues to be performed to this very day at various Christian venues around the country. This very first performance was televised in December of 1983 on the Trinity (as in Holy Trinity) Broadcasting Network. 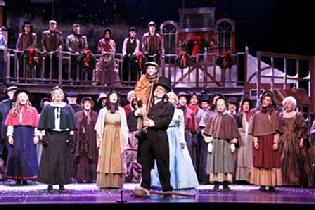 I have a hard time forcing myself to be as rough on Christianity as I used to be, given the atrocities committed by Muslim fanatics on a daily basis and the way in which the world grovels for those same Muslims, all the while the world pretends to be “daring” and “iconoclastic” by relentlessly bashing Christians and Jews. Uh. Yeah. Gutless hypocrites.

At any rate since I’m a non-believer in all the world’s religions I laugh my ass off whenever I watch The Gospel According to Scrooge, but committed Christians will probably like this Carol for all the same reasons that someone like me laughs at it.   END_OF_DOCUMENT_TOKEN_TO_BE_REPLACED 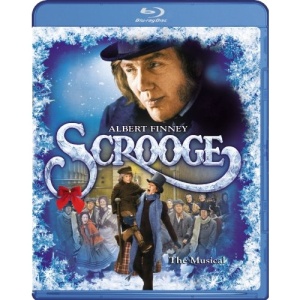 Christmas Carol-A-Thon 2014 continues here at Balladeer’s Blog with a look at the 1970 musical version that starred Albert Finney. The only – and dubious – advantage to having such a young man portraying Ebenezer Scrooge is that he could realistically play Scrooge’s younger self in the Christmas Past scenes.

Big deal. In reality it meant that the portions with Belle get dragged out even longer and more excruciatingly than they usually do, just to take advantage of the fact that for once it’s not a different actor playing the younger Ebenezer. Again – big deal.

Yet I like this version much more than I should. A rerun of it late one Christmas night was my first exposure to it years ago when I was first getting into the multiple versions of A Christmas Carol. That has probably colored my feelings about it all these years because I have to admit when I read negative reviews of this production I laugh like hell and nod my head in agreement at all the bashing it gets … yet I still like it for some reason. END_OF_DOCUMENT_TOKEN_TO_BE_REPLACED