*** This review will cover the three Martin Hewitt mysteries that were dramatized in the first season of The Rivals of Sherlock Holmes. 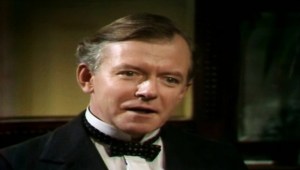 Review: Martin Hewitt was created by the same author who created Horace Dorrington, covered in a previous review of The Rivals of Sherlock Holmes. Unlike Dorrington, Hewitt is honest and looks out for his clients’ interests more than his own. Unfortunately, as portrayed by Peter Barkworth, he’s also more than a little bland.

Well, “bland” might be uncharitable. “Professional” may be more fitting. Barkworth’s Hewitt is serene and reassuring, putting his clients at ease no matter what crisis they’re going through.

In The Affair of the Tortoise Martin Hewitt is hired by Miss Chapman (Cyd Hayman), a former governess that he has just located so she could receive an inheritance from a distant relative. Miss Chapman wants Hewitt to clear one of her neighbors, Goujon (Timothy Bateson), of murder charges.