MUSLIM SAVAGERY: TAHARRUSH IS MASS RAPE IN THEIR VOCABULARY

News continues to come out about the mass rapes and assaults committed by Muslim men on New Year’s Eve in Cologne, Hamburg, Berlin, Helsinki, Zurich, Kalmar and Dusseldorf. As usual the political media did their best to cover up once again for Islam but the brave victims went public about who the attackers REALLY were.

Taharrush is the term that the Muslim World uses for these mass-assaults on women at public gatherings, and THAT is why it was mobs of Muslim males committing these outrages in cities across Europe. Yes, the Muslim World has a term for this savagery just like they have a term for when grown men rape little boys – bacha bazi.

A reasonable person might ask what kind of savages are so used to such barbaric behavior that to them it’s just another outbreak of Taharrush? Or bacha bazi? The answer will be the same one it has been for hundreds of years – Muslims. Islam is a fascist philosophy which marries religion to politics and it must be opposed loudly and daily, or Sharia Law will be the next Muslim “term” the political left tries to pass off as “diversity.”  END_OF_DOCUMENT_TOKEN_TO_BE_REPLACED

MUSLIM RAPE SPREE IN HELSINKI, TOO 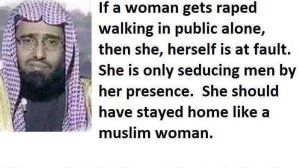 ISLAM IS THE REAL RAPE CULTURE

The REAL Rape Culture – Finland’s authorities are now admitting that Helsinki – along with several cities in Germany – was the site of a New Year’s Eve sexual assault outbreak “of unprecedented proportions” committed by roughly 1,000 Muslim “refugees.”

Another parallel with Cologne, Berlin, Dusseldorf, Munich, and Hamburg: the elected officials and political media outlets did their best to cover up the incidents. The brave victims would not remain silent, however. They forced this story to the surface, forcing the political media outlets to begrudgingly start paying attention to the ongoing revelations.

This is Islam. It is always the same story. Decade after decade, century after century, Muslim fanatics inflict their ignorance, their outdated social attitudes and, of course, their violence on the civilized world. And by the way, I’m an atheist so don’t bother accusing me of being Christian (the favorite gimmick of left-wing nutjobs) or Jewish (the favorite gimmick of Muslim nutjobs).  END_OF_DOCUMENT_TOKEN_TO_BE_REPLACED