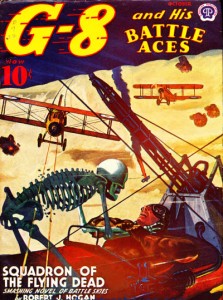 94. SQUADRON OF THE FLYING DEAD (October 1941) – It’s been awhile since our heroes have tussled with zombies of any sort so fans of undead adversaries will love this story!

G-8 and his Battle Aces find themselves in India and Afghanistan this time around, where another native-born menace has joined forces with the Central Powers to try to drive the hated British Empire out for good.

His name is Akhan, High Priest of the fictional Khush sect, a Thugee-type cult who also dabble in raising the dead. An army of walking skeletons is conjured up and unleashed on British Empire forces with our heroes being the only chance of thwarting Akhan’s plans.  END_OF_DOCUMENT_TOKEN_TO_BE_REPLACED