(This blog post is dedicated to my sister Debbie, who first introduced me to the Sherlock Holmes stories, which led me to the Raffles tales. )

RAFFLES (1975-1977) – A. J. Raffles, the master thief and star Cricket player was created by E.W. Hornung – the brother-in- law of Arthur Conan Doyle. As all Raffles fans know, A.J. and his bumbling assistant Bunny Manders were intended as a tongue in cheek criminal answer to Doyle’s Sherlock Holmes and Doctor Watson.

The camaraderie was similar, the Victorian to Edwardian Age setting was similar, the use of the sidekick as a device to have the expert character explain things to the reader was similar and good GOD, was the unintended homo-eroticism similar.

Raffles was portrayed by a long line of suave, debonair actors, from John Barrymore in Silent Movies on up through David Niven and others in Talkies. In my opinion, this 1970s British television series served up the best rendition of the iconic character.

Anthony Valentine perfectly embodies the sly, charming bon vivant whose public fame as a first-rate Cricket player helps conceal his secret avocation as a master jewel thief. Christopher Strauli does the best that any actor can be expected to do with the thankless role of the baby-faced, naïve and often inept sidekick Bunny. END_OF_DOCUMENT_TOKEN_TO_BE_REPLACED 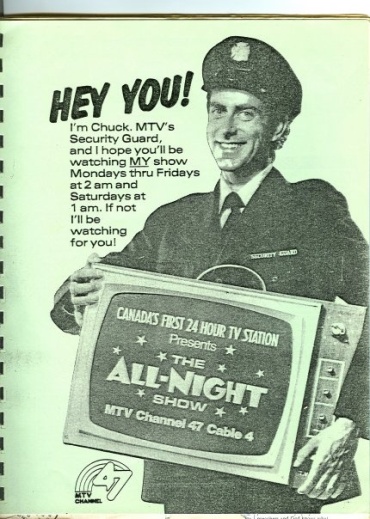 Chuck the Security Guard (Chas Lawther) in an ad featuring his catch-phrase “Hey you!”

Years before Night Flight, long before info-mercials had conquered the wee hours and more than a decade before Penn and Teller pretended to be late-night security guards hosting bad movies on Monster Vision, there was The All-Night Show.

In September of 1980 Toronto’s CFMT Channel 47 (Cable 4) launched The All-Night Show, which ran Monday through Friday from 2am to 6am, 1am to 6am on Saturdays. Chas Lawther earned a spot in Cult Valhalla by portraying CFMT’s Chuck the Security Guard, backed up by his never-seen sidekicks Errol Bruce and Michael Lennick playing Channel 47 cameramen Ryerson DuPont and P.B. Leonard. A young Jim Carrey did some voice work for the program during its lone year on the air. Jeff Silverman created and produced the show.

The show’s schtick was that Chuck, DuPont and Leonard would run their own pirate broadcast from CFMT’s facilities after the “real” station had gone off the air. Chuck and company would present bad and campy movies, music videos, cult t.v. shows and video oddities like old commercials, bizarre educational shorts and fragments of Canadian kitsch culture. Not only that but pitchmen could get air time on the show to hawk their new products, the more off-beat the better. Oddball comedy sketches and live phone calls were also part of The All-Night Show‘s regular segments.

Despite its comparatively short lifespan The All-Night Show has reached legendary status in Canada. The generation that caught the program when it was airing live are part of a very select club with an enviable claim to a certain “hipness beyond hip” status for getting to be there as it happened. One of those fans from the show’s actual run is the iconoclastic Canadian columnist Kathy Shaidle who blogs at  http://www.fivefeetoffury.com/    and is the author of Confessions of a Failed Slut, available at Amazon.

The daring and iconoclastic Kathy Shaidle

Kathy was kind enough to share some of her memories of The All-Night Show:

“When I was in high school The All-Night Show was a very big deal. Yeah, I was a weird kid, but fortunately I had a couple of almost-as- weird friends and sometimes they’d stay overnight to watch it with me.

“Even though we knew it was ‘fake’ the idea of a security guard taking over the TV station at night appealed to the rebel in us and all the other teenagers I knew were hooked on the show.   END_OF_DOCUMENT_TOKEN_TO_BE_REPLACED

With the flood of unimaginative new television programs, especially on various cable channels, I’m often surprised that some of the most entertaining shows in history don’t have their very own following of people who know waaaaay too much about them. As always here at Balladeer’s Blog I like to shine the spotlight on everything that is unjustly overlooked. Feel free to start holding conventions devoted to, and launching flame wars about, these six criminally neglected television programs. 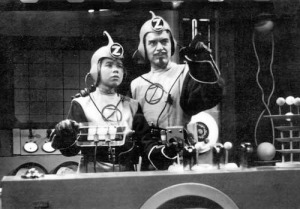 6. CAPTAIN Z-RO – (1951-1960) Over a full decade before Great Britain’s ultimate cult show, Doctor Who, hit the airwaves this American show featured the  titular Captain traveling in time and space with various sidekicks, including Jet, the young man pictured with Captain Z-Ro in the photo to the left.

In addition to adventures that saw the Captain dealing with a robot run amok in San Francisco and with a potentially fatal meteor collision, his “experiments in time and space” (the show’s oft-repeated tag line) found him helping out some of the exact same historical figures that Great Britain’s Time Lord from Gallifrey would go on to encounter, like Marco Polo, William the Conqueror and the Aztecs. As an added bonus Captain Z-Ro solved the mystery of the Great Pyramid itself!

This series is good, campy fun and a fringe benefit would be the laughs viewers can get from outdated social attitudes and special effects. The show’s pricelessly campy opening alone is worth the effort to track episodes down.

5. MASTERMIND (also known as Q.E.D.) (1981) – A young, bearded Sam Waterston starred in this incredibly charming series set in 1912 England. Waterston portrayed the title genius, American Ivy League scholar Dr Quentin E Deveril, whose  initials were, of course, a cutesy play on the Latin expression “quod erat demonstrandum”  (“what was to be demonstrated”), the famous Q.E.D. from academic  exercises.

With the flood of unimaginative new television programs, especially on various cable channels, I’m often surprised that some of the most entertaining shows in history don’t have their very own following of people who know waaaaay too much about them. As always here at Balladeer’s Blog I like to shine the spotlight on everything that is unjustly overlooked. Feel free to start holding conventions devoted to, and launching flame wars about, these END_OF_DOCUMENT_TOKEN_TO_BE_REPLACED