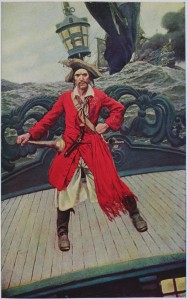 CARL BLUVEN AND THE STRANGE MARINER (1833) – By Henry David Inglis. Halloween month continues! This story from Norway would likely appeal to fans of the recent Pirates of the Caribbean movies with its combination of marine lore and supernatural doings.

One evening Carl Bluven, a poor fisherman, is given a gift for his upcoming wedding. That gift is a cask of butter washed back up from a merchant ship that was sucked into the legendary Maelstrom off the coast near Bergen and Stavenger. The gift is from Kahlbranner, the undead and supernaturally-powered mariner who rules the whirlpool called the Maelstrom and owns all the booty from the ships sucked into it.

After his honeymoon Bluven is settling into married life with his bride Uldewallas and one evening the tide, commanded by Kahlbranner, withdraws prematurely, grounding Carl’s fishing boat amid rocks. The strange mariner rises up from his home at the bottom of the Maelstrom in a sailboat that moves with no wind in its sails. Pointing to a ship on the horizon Kahlbranner informs Bluven that the whirlpool he controls will suck that ship down to the bottom of the sea and he will send along another gift.   END_OF_DOCUMENT_TOKEN_TO_BE_REPLACED