THE MACHINE TO KILL (1924): FROM THE AUTHOR OF THE PHANTOM OF THE OPERA 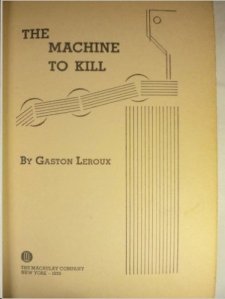 Gaston Leroux’s The Machine to Kill was written in NINETEEN TWENTY-FOUR. Many book sites list it as 1935, but that was just the year it was finally translated into English.

Personally I would use the title The Clockwork Dead Man or The Clockwork Killer because for modern readers The Machine to Kill sounds like a traditional science fiction tale about technology run amok.

In reality this neglected Gaston Leroux novel is a horror/sci fi hybrid about an android/ cyborg mix whose mechanized body has been outfitted with the brain, eyes and nervous system of a guillotined murderer. The robotic man – called Gabriel – was created by Dr Jacques Cotentin, who needed an absolutely fresh brain, hence having to settle for a just-executed criminal. END_OF_DOCUMENT_TOKEN_TO_BE_REPLACED