Synopsis: Ronald Lewis portrays amateur detective Dagobert Trostler, an Austrian bon vivant and man about town during the twilight time of the Habsburgs. Given the various scandals and potential public humiliations that can befall pretentious aristocrats of any time period, Dagobert offers his detective skills to the well-connected and the wealthy.

Trostler doesn’t expect any pay and usually goes without any public credit, because if he has resolved the case properly no one will ever know he or his clients played any role in certain events.

Dagobert isn’t above fisticuffs or gunplay or even breaking & entering as he indulges in his favorite sport of solving mysteries. His manservant Berthold (Denis Thorne) is skilled at disguise and at casing a joint for his boss when needed.

Trostler’s supporting players include Heinrich Weinlich, Vienna’s Police Commissioner, who admires Dagobert’s detective skills and way with the ladies, but is often annoyed by the way our charismatic hero puts him out of his way in furtherance of the amateur’s investigations. Weinlich is done up like Captain Kangaroo and is portrayed by Harold Kasket.

Anonymous Letters is set in Vienna during the year 1900. Archduke Othmar (Michael Aldridge) has recently married the now-Countess Nadja (Nicola Pagett), a beautiful former starlet of the Austrian stage. An unknown party begins sending Nadja a series of obscene and threatening letters sprinkled with intimate details of the Countess’ anatomy.

The author of the letters is implying they are a former lover and that Nadja’s private behavior is wanton and lustful. They threaten to tell her aristocratic husband. Such a scandal would likely cause the Archduke to end their morganatic marriage and might prompt the Habsburg Emperor to banish the young beauty to a convent for five years, as he did in another such case recently.

One of Nadja’s friends, the Countess Tildi Leys (Carolyn Jones), is receiving similarly vulgar letters threatening to ruin her with a public scandal, too. The suffering ladies seek out the aid of Dagobert Trostler, trusting to his discretion and brilliance to save them. 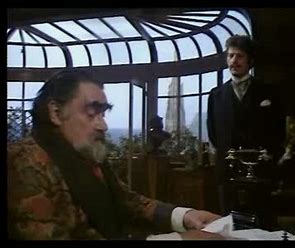 Trostler takes the case and is intrigued that analysis of the handwriting in the anonymous letters reveals both male and female characteristics. Our hero also attempts what today is called a psychological profile of the sender. Among the suspects are Nadja’s former colleagues in the Austrian theater community, especially Walter Frankenburg (Francis de Wolff), who hated losing his best actress to a royal marriage.

In addition to his handwriting analysis skills, Dagobert possesses arcane knowledge of tobacco, inks and stationery, like his British counterpart in the detective field. Plotting out elaborate traps for his quarries is also all in a day’s work for this Austrian Holmes.

In keeping with his and his clients’ obsessive secrecy, Trostler takes the law into his own hands to deal with the malefactor behind the title letters. (It’s worth noting that out of all of his cases, this Viennese detective only turns over the perp to the authorities ONCE.)

This production leaves out our detective’s usual Watsons from the short stories, Andreas and Violet Grumbach, in favor of Nadja and her husband. Understandable given the nature of the tale. Why drag another well-connected married couple into the story just to ooh and ah over Trostler’s talents like everyone else does.

The mystery isn’t one of the toughest, but the performances make this a must-see. Lewis is riveting as the eccentric, brilliant social lion whose odd sideline gets him more trouble than you’d think it would be worth. Nicola Pagett is very likeable as the female lead, too, and even the smallest roles are brought to life by true pros.

Anonymous Letters is a terrific example of this program’s “Sherlock Holmes WITHOUT Sherlock Holmes” charms and Police Commissioner Heinrich Weinlich will bring out whatever Bob Keeshan jokes you’ve been carrying around in your subconscious all these years.

Now how about somebody adapting the other Dagobert Trostler mysteries for the big or small screens or streaming services? +++