Synopsis: In Copenhagen, harried and put-upon Detective Lieutenant Eigil Holst gets two fresh cases added to his pile – a missing persons case involving the wife of a local merchant, and a Russian Countess who claims her brother-in-law has pursued her with the intention of murdering her.

John Thaw portrays Lieutenant Holst but neither boozes like Inspector Morse nor manhandles suspects like he did in his Sweeney days. Holst displays a casual savviness and a street-smart air, especially when dealing with a slippery hotel front desk employee. “Professional” is the defining adjective for Thaw’s Holst.

In any event this particular case isn’t a “whodunnit” but a “who’s telling the truth” mystery.

Countess Maria Wolkinski (THE Catherine Schell) insists that her anti-Tsarist brother-in-law Dimitri (Philip Madoc) has followed her from Russia to Denmark intent on killing her so he can inherit the land his late brother left to her. She also claims he has already murdered her child but no proof can be found to support that accusation. Physicians’ records say the child died of natural causes.

Dimitri, on the other hand, insists that the Countess had his brother killed by the Okhrana (Russian secret police) by denouncing him for sharing his own anti-Tsarist sympathies. He claims he just wants to talk to Maria to “negotiate” with her regarding his late brother’s estate.

Lieutenant Holst’s superior Inspector Anderson (Michael Turner) makes it clear to Holst that his investigation needs to avoid causing an international incident … as happened in another recent case and which destroyed the career of a fellow detective.

While Holst tries to determine which party is telling the truth we viewers get treated to a riveting police procedural set in 1905 Copenhagen. If this truly reflects Rosenkrantz’s writing approach he could also be considered the grandfather of today’s countless police procedural dramas around the world.

At first Dimitri looks like the clear bad guy, given his wily espionage antics, shady international associates and his revolutionary sympathies (the failed 1905 uprising – later immortalized on film in Battleship Potemkin – had just happened in Russia). Later in the story, Lieutenant Holst’s digging raises the possibility that apparent victim Maria may actually be an outright Tsarist Agent, out to destroy Dimitri and his like-minded friends. 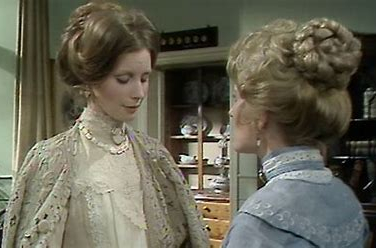 Holst’s wife Ulla (Virginia Stride) goes in the opposite direction, at first mistrusting and suspecting Maria, then doing a 180 after the Lieutenant’s superiors force him to let the Countess lie low in his home for a few days. Maria wins over Ulla.

A potential tragedy is in the offing, it seems, no matter which way the case is resolved. Doing nothing against Dimitri may give him the opportunity to kill Maria, but arresting Dimitri may result in the Tsarist forces at the Russian Embassy getting him, torturing and killing a possibly innocent man.

Since the Tsar is related to King Christian of Denmark, more and more political pressure from above gets applied to Holst’s superiors AND Holst himself. It becomes clear that doing what is right and LEGAL may be career suicide for our hero.

Holst shows unflappable courage in the face of hostile powers but in the end we wind up with a very sad and downbeat ending reminiscent of Chinatown or The Marcus Nelson Murders or so many other police stories in which power and connections prevail over justice.

The finale is very powerful but it lacks a potent closing line of dialogue like “Forget it, Jake. It’s Chinatown.” The subplot of the missing person shows the ironies inherent in a career in police work since Holst gets profusely praised for that case in which he played no significant role, but gets only grief for the main mystery on the menu.

As a side note I will mention that between this story and the 1890s Inspector Lipinzki mystery from earlier in this 2nd Season I was surprised by how far back goes the trope of the maverick detective defying their superiors and risking their career in pursuit of justice. +++