FOR THE OTHER CREATURES IN THIS MONSTER RALLY CLICK HERE

Lore: Beatrice Rappaccini, also called the Poison Woman, had been experimented on by her mad scientist father since infancy. Some dark rumors even held that the father – Doctor Giacomo Rappaccini – had spawned her from a seed-pod and that his tales of a wife were lies.

Beatrice was so toxic that she was the only one alive who could come into contact with the monstrous and deadly plants in her father’s courtyard garden. The Poison Woman’s beauty drove men wild, tempting many admirers to brave the dangers of her father’s mutated plant life.

The dark beauty’s flesh was a toxic poison and her breath could kill insects, snakes, rats and small children. Dead creatures made the ideal fertilizer for the creations of Beatrice’s father. It was hinted that Beatrice fed on the vermin killed by her breath, just like Venus Flytraps and other carnivorous plant-life. 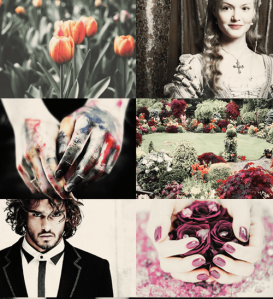 Beatrice lived with her father in his run-down home in the back-streets of Padua, Italy. A young student named Giovanni Guasconti was the only man to engender tender emotions in the Poison Woman.

Unfortunately the two lovebirds became caught in the middle of the professional feud between Doctor Rappaccini and his rival Professor Baglioni, resulting in a horrific tragedy.

The original story of Rappaccini’s Daughter was written by Nathaniel Hawthorne but there have since been opera, television and movie adaptations.

An appropriate alternate title for the story would be I Can’t Believe This Wasn’t Written By Hoffmann (I’m just kidding, Hawthorne fans.)