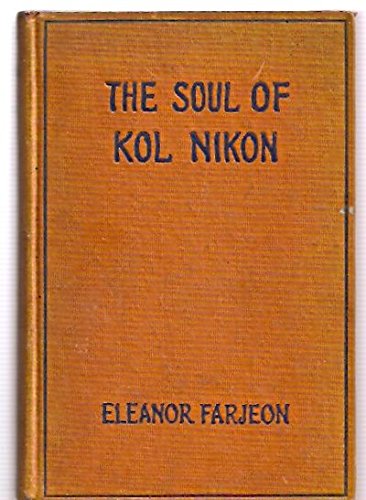 THE SOUL OF KOL NIKON (1913) – Written by author, poet and librettist Eleanor Farjeon as a serial in 1913. Later novelized. Halloween Month rolls along with another look at a neglected tale of horror.

In Denmark a baby named Kol Nikon is born to a hysterical woman whose husband has just died. The terrified mother is convinced that Elves caused her husband’s death and replaced her real son with a Changeling.

Kol Nikon thus grows up unloved by his fearful, possibly insane mother. Plus the young man is shunned by the equally superstitious villagers of his mother’s hometown. Kol is comforted by a pagan nature goddess and grows up with all manner of supernatural creatures as his playmates.

As the Changeling matures he longs for a soul of his own since – as the offspring of Elves who exchanged him for the human infant they stole from his mother – he is soulless. Kol Nikon’s quest for a soul to steal would make a good (but dark) companion musical to Pippin, which was also based on a work by Eleanor Farjeon.

Kol is very gifted musically and he learns his music can induce a variety of moods in the humans he encounters. His eerie experiences range from discovering the unpleasant fate of the human child he was exchanged for to using his enchanted music to switch bodies with potential victims.

As the story nears its climax Kol Nikon switches bodies with a man named Janke so that he can sleep with Janke’s true love Fiora. Kol not only gets Fiora pregnant with his unearthly child but causes Janke to kill himself.

Appalled at these last horrors the superstitious villagers are finally moved to take furious action against Kol Nikon. They stone the Changeling to death.

Like all of Farjeon’s writings aimed at adults The Soul of Kol Nikon is well-done, fascinating and stays with you after you read it. I’m partial to her poetry but I’m a poetry geek. Some of the Wiccans who read my blog would likely enjoy Eleanor Farjeon’s poems if they aren’t already familiar with them. +++