Since then other writers have churned out so many silly Bourne stories (ten at last count) to the point where Jason Bourne In Spaaaaace is the only avenue left unexplored. Or maybe a crossover with All My Sins Remembered. The Matt Damon movies use virtually nothing but the Jason Bourne name.

To me the bulk of the appeal of the original novel The Bourne Identity was that a reader only had to suspend disbelief just enough to accept an amnesiac figure surviving the unique set of circumstances presented in that story. 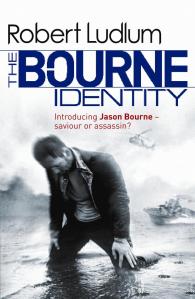 At the end it was accepted by all characters that David Webb/ Jason Bourne was in no condition to continue his intelligence work. Not only because of his amnesia but because he had found happiness with Marie, which made him lose the near-suicidal edge he had needed to succeed as Bourne.

In my opinion Ludlum should have done PREQUEL stories of David Webb as Delta in the Vietnam War’s Operation: Medusa or his days pursuing Carlos as Cain/ Jason Bourne PRIOR to his amnesia.

HERO: Since there are virtually no spoilers left about this character who has had everything but his own comic book series I will go ahead and lay out all the details of the ORIGINAL figure. This is for potential Bourne fans who associate him purely with the silly super-soldier nonsense of the movies and have avoided him because of that.

I think transferring Jason Bourne to more recent time periods robbed the story of a great deal of its unique appeal. Movies CAN work as period pieces. Studios still churn out spy flicks set during World War Two for crying out loud. There’s no reason why they can’t keep the period setting for stories dependent on the Vietnam War or late Cold War events for their full impact.

So again … HERO: DAVID WEBB, an American scholar who specialized in ancient Vietnamese culture and spoke multiple regional languages. Webb had been serving in various diplomatic posts throughout Indochina and had a Vietnamese wife and children.

When his wife and children were killed during a fly-by strafing from a plane of unknown national origin Webb left diplomatic work and volunteered for the top secret Operation: Medusa. (Ludlum’s fictional version of the real-life Phoenix Project.)

Under the codename Delta (later refined to Delta One), David Webb thrived in that Black Ops program. Delta proved ruthless and bloodthirsty, with his command of local languages and culture making him an irreplaceable asset against the Viet Cong, the North Vietnamese regulars and international mercenaries in the region.

After the Vietnam War David Webb pursued a teaching career back in the U.S. By now a figurative “adrenaline junkie” and still feeling empty without his wife and children, the former Delta became listless and self-destructive.

David Abbott, the Monk of American Intelligence operations and creator of Operation: Medusa, sought out Webb for a dangerous, probably suicidal deep cover assignment. The objective: flush out and capture Carlos, the (real-life) international assassin and terrorist facilitator.

VILLAIN: Ilich Ramirez Sanchez aka Carlos the Jackal. In my view using a real-life figure such as this was a misstep on Robert Ludlum’s part. Using the real Carlos limited the story too much, since readers would know going in that Carlos would be neither killed nor captured.

Ludlum usually just does a nice pastiche of real-life figures, making it clear who they’re based on but keeping enough flexibility so that he is not bound by real-world events regarding the character’s ultimate fate. Robert could have used a name like “Charlot” (as in Charlemagne’s traitorous son) to let people know the character’s roots while preserving the crucial “Cain is for Charlie, and Delta is for Cain” sign and counter-sign.

Robert Ludlum’s Carlos runs an enormous international organization which seemingly controls much of the killing for hire that goes on across the globe. Picture Sax Rohmer’s cult of Si-Fan Assassins crossed with Edgar Rice Burroughs’ Assassin’s Guild.

SYNOPSIS: Our hero – still unknown to the reader at the novel’s beginning – is on a mid-sized ship in the Mediterranean Sea. He is beaten, shot and left to die in the sea. He is saved and taken to an expatriate British physician in a sink-hole of a coastal town.

For a cut of whatever amount is in that account the Doctor facilitates the Patient’s journey to Zurich to access the funds. Along the way hostile forces work against the amnesiac man but he survives because of reflexive skills at martial arts, gunplay and subterfuge. (See my review of A Man Called Noon for Louis L’Amour’s earlier, WESTERN version of this tale. Not that I’m accusing Ludlum of anything.)

In Zurich, the Patient maneuvers his way to accessing the Swiss account, including documents which indicate his name is Jason Bourne and his account holds millions of dollars paid to him by a company called Treadstone 71. Bourne withdraws much of the money, wiring some to the drunken MD and some to banks in France.

During one running fight our hero grabs a woman to use as reluctant cover, Canadian Government Economist Marie St-Jacques. The pair survive and in the most unconvincing  espionage story romance since Three Days of the Condor they fall in love.

Jason and Marie make their way to France where, while undertaking the dangerous covert task of dipping into Bourne’s transferred money, they uncover more and more about his mysterious past. Circumstances make them conclude that Jason is an international assassin codenamed Cain.

SPOILERS: I use the word “spoilers” loosely since so much of this tale is already known thanks to the 1988 television mini-series and the initial Bourne movie. What Jason and Marie have uncovered is David Webb’s cover identity under which he was working to flush out Carlos.

The Monk’s plan called for a certain amount of realism so Carlos and his minions would believe that Cain was a competitor trying to move in on Carlos’ territory. When the master assassin’s people investigated “Cain’s” past, they were able to piece together a very plausible backstory for this threat to their employer’s preeminence.

Seemingly, Cain was Jason Bourne, a former operative in David Abbot’s (The Monk’s) Operation: Medusa. Using the assassin skills he had picked up as a Medusan, Bourne went into business for himself. After making a reputation in Southeast Asia after the war, Cain moved on to Europe to challenge Carlos in his back yard.

This covert operation – codenamed Treadstone 71 – was so Top Secret most of the world’s intelligence services knew nothing about it. They, too, believed Cain was a rival assassin to Carlos. This further complicated David Webb’s undercover mission as Jason Bourne, since he was being hunted by legitimate international intelligence outfits IN ADDITION to Carlos’ network of assassins.

On the plus side for the Cain operation, we readers are told that David Webb succeeded in saving the lives of a few prominent politicians that were targeted by Carlos. In addition he killed or turned in a number of Carlos’ subordinate assassins and exposed many support operatives in Carlos’ network, including figures high up in international finance and politics.

Initially Carlos and most of the world’s intelligence agencies attributed all these actions to Cain’s attempt to destroy his rival Carlos. Gradually, however, a few men in U.S. intelligence and even Carlos himself began to suspect the truth: that Cain was a construct intended to smoke him out for capture.

Carlos figured two could play that game. He framed David Webb/ Jason Bourne for killing many of the Treadstone 71 staff and made it look like Webb/ Bourne had sold out to Carlos. Now with Washington AND Carlos wanting “Cain” dead, David and Marie faced overwhelming odds. (Donny and Marie, however, remained completely unscathed by all this.)

In the end, Bourne and Carlos squared off against each other in a cat-and-mouse battle of wits and guns at the former headquarters of Treadstone 71: a brownstone on 71st Street in New York City. Thanks to a couple of actual decent human beings in the American intelligence community (This IS fiction!), Bourne and Marie survive, but Carlos escapes.

COMMENT: After 99% of a genuine classic of spy fiction, The Bourne Identity has to end in lame anticlimax simply because of Robert Ludlum’s decision to use a real-life figure who could not be captured or killed to end the story.

All he had to do was instead fictionalize a Carlos-like pastiche and we readers would have gotten a never to be topped finale full of action, drama and symbolism. That New York brownstone which served as Treadstone 71’s headquarters was where “Cain/ Jason Bourne” was created, so it was the perfect spot for the final showdown between Jason and his arch-enemy.

When we finally got Ludlum’s version of Carlos’ death in The Bourne Ultimatum, it was so lame and disappointing that it probably inspired Damon Lindelof’s entire career. (I’m kidding!)

Having a Carlos-manqué get killed by our hero at the end of The Bourne Identity would not have interfered with Ludlum’s sequels. The Bourne Supremacy was all about the Far East and in The Bourne Ultimatum a fictional successor to Carlos OR an old foe of David’s from his Delta or early Cain days would have been just as good a villain as the limp, lifeless Carlos that Ludlum gave us.

All that aside, the positive qualities of this novel are legion. The downside that I explored above merely knocked The Bourne Identity from number 1 to number 2 on my list of Ludlum’s top novels.

FOR THE RYAN DRAKE SPY NOVELS BY WILL JORDAN CLICK HERE.

FOR MORE OF THE TOP LISTS FROM BALLADEER’S BLOG CLICK HERE:  https://glitternight.com/top-lists/