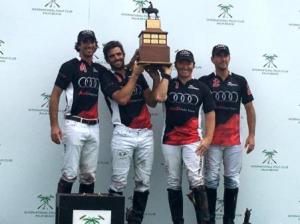 FIRST CHUKKER – Coca Cola – which has the female player Gillian Johnston on its team – seized a 3-0 lead off of 1 Goal from the field and 2 scores on Penalty Shots. Audi squeezed in 2 answering Goals of its own before the Chukker ended with the Red Colossus on top 3-2.

SECOND CHUKKER – The Bavarians took the opening Toss-In of this Chukker and tied things up at 3 Goals apiece. From there Audi and Coca Cola played each other move for counter-move and score for score. The count was now 5-5.

FOURTH CHUKKER – To start the 2nd Half the Red Colossus went on top 6-5 only to have Audi pull even again at 6 Goals apiece. It was more of the same after that, with the 4th ending in a 7-7 deadlock.

FIFTH CHUKKER – The Bavarians’ offense exploded this time around, swatting in 3 Goals while their defense limited Coca Cola to just 1 answering Goal. Audi held a 10-8 lead going into the 6th and final Chukker.

SIXTH CHUKKER – Goals virtually flew between the Uprights in this exciting sextant. The Red Colossus started off with 2 unanswered scores to tie the Match 10-10. The Bavarians went up 11-10 but Coca Cola responded, tying things up at 11 Goals to 11. Magoo Laprida and Nic Roldan proceeded to thwack in the final 2 Goals of the Match to give Audi a 13-11 victory.