Balladeer’s Blog continues its examination of this neglected cult show from the 1980s.

SERIAL: Before showing and mocking the movie machine-gun toting Randy Clower and Richard Malmos, as members of the fictional Film Vault Corps (“the few, the proud, the sarcastic”) showed and mocked a chapter of the Republic Serial Radar Men from the Moon (1952).

FILM VAULT LORE: Our Film Vault Technicians First Class would pull the usual Movie Host duties like providing background info on the films and serials, and would also do comedy sketches centered around their fictional Film Vault Corps before and after commercials. They protected their duty station from menaces like giant rats, cellumites and other threats.

That duty station – Level 31 Core 27 of the Film Vault System was accessed via an industrial park behind KDFI Channel 27’s headquarters off Highway 183 near Dallas. The show was directed by Karl Newman, who often good-naturedly bemoaned Randy and Richard’s tendency to ad-lib. Sometimes in print interviews Newman would joke that if they used a script they would need far too many takes for Clower and Malmos to read their lines right, hence the ad-libbing.

THE MOVIE: Blood Beach (1980) was one of  the least effective horror films of the 1980s. It had a half-decent premise – a monster beneath the sand at a California beach sucking victims down into its hellish maw – but squandered that premise with incredibly slow pacing. The inane dialogue spouted by the annoying characters didn’t help matters. 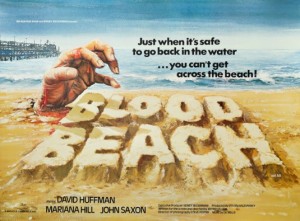 Mariana Hill, who appeared in the 1970s infantilism horror film called The Baby, plays Catherine Hutton, who comes back to California when her mother is the first victim of the beach-dwelling carnivore.

David Huffman, who will actually make you long for a thespian giant like David Hasselhoff, plays Harry Caulder, Catherine’s old flame and a member of the Harbor Patrol. David and Catherine investigate the strange goings-on at the place dubbed “Blood Beach” by the local press.

Burt Young from Rocky and Carnival of Blood staggers and mumbles his way through another film. This time around he plays Detective Sgt Royko, who hates California and constantly makes unflattering comparisons between the west coast and his beloved home town of Chicago. Why doesn’t he just move back there? We never find out.

John Saxon plays Captain Pearson, the regulation wisecracking, belly-aching cop who acts like the REAL horror of the events at Blood Beach resides in how personally inconvenienced he is by the killing spree.

Darrel Fetty IS Hoagie, a Harbor Patrol partner of our hero Harry. Darrel sports a White Guy Afro, moonlights by singing goofy songs in nightclubs and is so obnoxiously beach-minded all his scenes play like proto-versions of Baywatch.

Stefan Gierasch plays Dr Dimitrios, a creepy coroner who is more mad scientist than pathologist and who speaks in eerie, halting sentences like the guy from the Killer Nerd movies.

Mickey Fox shows up as “Moose”, a decidedly androgynous character who runs a hot dog stand and who looks like the inspiration for the old SNL character Pat.

Eleanor Zee portrays Mrs Selden, the crazed bag lady who sleeps near the beach, witnesses several monster attacks and generally shrieks bag lady gibberish at everyone who crosses her path.

Assorted men and women make appearances as victims who get sucked down into the sand-creature’s mouth. None of them make much of an impression but the female victims are SO faceless and unmemorable there are a few spots in the movie where you find yourself saying “Hey, I thought that was the woman who got killed in the last attack scene!”

Don’t worry – every thread of this man’s wardrobe will be painstakingly described later in the movie.

Memorable moments from the film include:

* When the crazed bag lady dementedly tells Catherine that her mother was raped and murdered and buried on the beach. All of those remarks are based on NOTHING! (?!)

* Our beach-creature’s unpredictable appetite. Sometimes it devours its victim’s whole, other times it just chews up their legs or otherwise disfigures them while on two occassions it bites off a dog’s head and, enjoyably enough, a rapist’s cock in mid-attack.

* The scene where Harry pours what looks like Old Spice cologne on a hot dog he’s about to eat.

* The way the monster might as well be playing match-maker for our two leads. It kills her mother to bring her back into town and kills off the stewardess he’s been sleeping with.

* When John Saxon’s griping reaches its apex. This happens when he gets hauled onto the carpet by local politicians upset about the beach mayhem. Saxon calls one office-holder “a grandstanding twat” and makes a speech in which he basically tells his superiors that unless he and his men get paid more they won’t do shit to stop the Blood Beach slaughter. Sgt Royko loves this tour-de- force example of using the public’s safety as a negotiating tool.

And speaking of Royko, he steals the movie (insert your own petty theft joke here) in scenes that make him the most quotable Royko since Mike. – For example:

Richard Malmos (left) and Randy Clower relaxing between scenes on the set of The Texas 27 Film Vault.

a) Royko’s Chicago-centric dialogue includes oaths that he swears “on the grave of Richard J Daley.”

b) After Captain Pearson actually exhorts his men to “get stoned” if they have to to solve the Blood Beach mystery Royko says – “In Chicago they’d have given him a medal!”

c) When “playful” beach bums throw a hot dog from Moose’s at him, saying “We found that guy’s wiener” Royko replies “Go play in Cicero!”

d) And in response to a citizen screaming in terror at the sight of what’s left of a half-digested victim crawling along the beach – “Get out of the way, jerk off!”

That victim – a CPA – was reported missing by his wife. The scene where she recounts to Sgt Royko what her husband was wearing when he disappeared goes on for what feels like an eternity and redefines the expression “excruciating detail”. Centuries from now if only this fragment of Blood Beach has survived future generations will be able to perfectly reconstruct what this metal-detector-using dweeb was wearing when he left home that morning.

SPOILER: Royko actually seems to come in handy during the climactic stakeout for the monster. Just when it looks like the coroner’s mad scientist persona will motivate him into aiding the escape of the creature he finds so “fascinating” Royko will have none of it and detonates the explosives, blowing the monster to bits …

… Unfortunately the film’s epilogue shows us that each individual smithereen that the monster was reduced to has regrown as a whole beach monster in its own right. Happily, though, there was NEVER a sequel to this Grade Z level version of a B Movie.