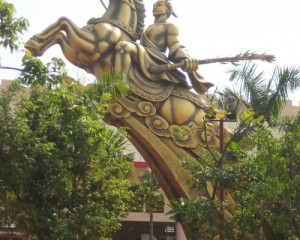 THAN GIONG – Vietnamese god of war and 1 of the 4 main deities in their mythology (often called The Four Immortals). The mother of Than Giong once fell into one of the enormous footprints left from long ago by Khong Lo, the primordial giant. She thereby became pregnant (you know mythology!) and gave birth to a baby who was always silent and unmoving for the 1st several years of his life. At length during an invasion by China the reigning member of the Hung Vuong Dynasty sent messengers around the kingdom asking for any help that could be given against the invaders.
*
The baby spoke for the first time, telling his parents to bring the messenger in their village, Phu Dong Village , to him. He was brought and the baby identified himself as a god who would repel the invasion. Because the child talked like an adult the messenger and the villagers believed him. The messenger went to tell the reigning Hung Vuong, while Than Giong’s parents and the other villagers obeyed the child’s instructions to bring him all the food they could find. Over the next days the child consumed enormous quantities of rice, pork, beef, fish and vegetables, growing and growing all the while.
*
In later versions of the myth he simultaneously has the entire kingdom scoured for iron so the ironworkers can labor night and day to forge a giant suit of armor, a giant sword (or lance) and a giant iron horse for him to ride. When Than Giong had reached enormous size he donned the armor, took up the weapon and sat astride the enormous iron horse. Instantly the horse came to life, breathing fire,  and the 2 rode off to face the invading Chinese army.  On the way the giant iron horse’s fiery breath burned some bamboo and the myth says that is the origin of white bamboo. In some versions the horse’s fiery breath accidentally destroys a Vietnamese village during a battle with Chinese troops.
*
At the head of the Vietnamese army the gigantic Than Giong with his iron weapon and his horse’s fiery breath wreaked havoc on the Chinese army, slashing, crushing and burning their troops. When the invasion had been expelled and the war was over Than Giong rode his giant horse up the side of Soc Mountain from the peak of which he and his horse flew up to the heavens to live with the other sky-dwelling deities.
*
The horse’s giant hoofprints are said to have been the origin of the series of small lakes near Soc Mountain. Various markings on the side of the mountain are also said to be caused by the horse’s hooves. In some versions of the myth the ancient Vietnamese did not know anything about ironworking until the events in this story and in addition to being a god of war Than Giong is also the god of ironworking. This myth is much older than the Iron Age and in the next paragraph I’ll detail the pre-Iron Age version of the story.
**
The pre-Iron Age version of the myth of Than Giong of Phu Dong Village starts out the same, the “impregnation by footprint” bit, the child who neither moves nor speaks until the emissaries of the current Hung Vuong ruler arrive in Phu Dong Village with a call to arms against the invading Chinese army, etc. However, in this version when Thanh Giong devours the food over the course of days he simply grows to the size of a normal (albeit tall) man, arms himself with contemporary weapons and implements and goes out to kick Chinese butt.
*
This version of the story emphasizes the atrocities of the invading army, particularly a sick game they are playing with Vietnamese captives: The Chinese soldiers came across a life-sized stone sculpture of a riderless horse near Phu Dong Village. One by one they have  their helpless captives sit on the horse, telling each one that if he can get the horse to give him a ride they will not be killed.
*
Naturally none of them have been able to and suffer the consequences (beheading), until Than Giong arrives on the scene, accepts the challenge, and when he sits on the horse it immediately comes to life. He then slaughters the Chinese troops who were playing the cruel game and , astride the stone horse, leads the Vietnamese against the Chinese army, eventually driving them out.
*
In later versions of the story the stone horse comes to life when Than Giong sits on it and then he and the horse both grow to enormous size, and on  and on with subtle changes here and there until  the myth  evolved into the version I listed in the opening of this entry. All versions ended with Than Giong and his horse flying up to the heavens when the invading Chinese are driven out.
*
FOR ADDITIONAL VIETNAMESE GODS AND GODDESSES CLICK HERE
© Edward Wozniak and Balladeer’s Blog, 2010. Unauthorized use and/or duplication of this material without express and written permission from this blog’s author and/or owner is strictly prohibited. Excerpts and links may be used, provided that full and clear credit is given to Edward Wozniak and Balladeer’s Blog with appropriate and specific direction to the original content.