LIBERALS AND CONSERVATIVES AND ACTIVISM 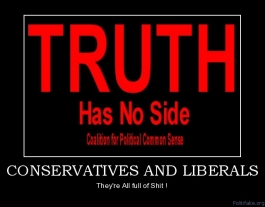 Balladeer’s Blog remains the only site that criticizes both Liberals and Conservatives equally. Full disclosure: I used to consider myself a Liberal years ago before American Liberals adopted their attitude of “Islam: Right or Wrong!”

American Liberals (really illiberals) are such fundamental cowards and weaklings that it’s hilarious when they try to compare themselves to Liberals of long ago who REALLY DID show courage.

Twenty-First Century Liberals are really just hypersensitive, judgmental and intolerant jackasses exactly like the worst Conservative Christians they hate. Even more ridiculous is the way American Liberals actually think that “activism” means filing a complaint with higher authority to make them put a stop to something that upsets their delicate sensibilities.

It’s always funny to see how helpless and easily subdued Liberals are when they’re in an environment where they can’t just file a complaint about someone they disagree with. Or when they’re not surrounded by thousands of like-minded fools carrying protest signs and chanting the same mindless slogan.

2 responses to “LIBERALS AND CONSERVATIVES AND ACTIVISM”