BOOKS EXAMINING ISLAM THE WAY ALL RELIGIONS SHOULD BE EXAMINED 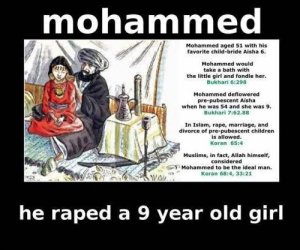 It’s your old buddy Balladeer, but you can call me “the puppet of Jews” like the Muslim fanatics who threaten me do! My regular readers are used to the fact that I treat ALL religions as mythology including Islam, the blood-soaked bully on the block. Just deal with it, Muslims. Christians, Jews, Buddhists, Wiccans and others may get uncomfortable with critical examinations of their belief system but they’ve learned to live in the 21st Century so no matter how angry they get they don’t threaten with the regularity that Muslims do.

Remember, just because I’m not a Conservative it does NOT mean I’m a Liberal. Unlike American Liberals I have a backbone and I won’t refrain from mentioning Islam’s homophobia and misogyny no matter how many threats I get. At any rate here are some of the best books I’ve come across that regard Islam with the critical eye that too many people are afraid to cast Islam’s way:

WHICH KORAN? VARIANTS, MANUSCRIPTS, LOGISTICS – By Ibn Warraq. This is similar to the many books that analyze differences in the Bible, which is supposedly “divinely inspired” (lmao) like the Koran. Warraq examines the significance, context, extent and meaning of the different versions of the Koran that are used throughout the Muslim world. A very thought-provoking book that is long overdue.

TEXTUAL CRITICISM AND QURAN MANUSCRIPTS – By Keith E Small. This book takes a more specialized approach to the previous book’s topic. Small’s impressive work details the multitude of early Koran variants and makes the argument that an attempt at true uniformity in textual content was not seriously attempted until the end of the 7th Century C.E. In support of this he explores surviving remnants from the earlier part of the 7th Century when the text was much more fluid and variable. Hard to believe there are still barbarians who kill over different interpretations of “holy” books.

THE TROUBLE WITH ISLAM TODAY: A MUSLIM’S CALL FOR REFORM IN HER FAITH – By Irshad Manji. Irshad Manji is an openly lesbian Muslim who courageously calls for reform of her faith. Despite death threats to her and her associates Irshad continues the fight against Islam’s homophobia and misogyny with more courage than all of the cowardly hypocrites of the American Left put together. Her book is a must read.

A GOD WHO HATES: THE COURAGEOUS WOMAN WHO INFLAMED THE MUSLIM WORLD – By Wafa Sultan. But let’s be honest – it doesn’t really take much to inflame the Muslim world. Anyway, those of us who enjoy watching Wafa Sultan verbally destroy male Muslim scholars in debates – when those men have the courage to actually go through with debating her, that is – will love this book. The book is by  turns inspiring and infuriating as Wafa examines the horrible way women are treated in Muslim-run countries and in Muslim communities around the world. This book convinced me Sharia MUST be opposed because it is incompatible with multiculturalism but mostly because of how it enables the treatment of women as slaves and worse.

ISLAM DISMANTLED: THE MENTAL ILLNESS OF PROPHET MUHAMMAD – By Sujit Das. I’m a big fan of attempts to examine the possible mental illness of the central figures of each of the world’s religions. So many religious “revelations” bear similarities to delusions suffered by ill minds. I’ve read books taking this approach with Jesus, Buddha, Confucious, Joseph Smith, Zoroaster and others. There is no reason Islam’s central figure should be off-limits to this approach.

THE TRUTH ABOUT MUHAMMAD: FOUNDER OF THE WORLD’S MOST INTOLERANT RELIGION – By Robert Spencer. The title is a bit silly since after all this time nobody can really know “the truth” about figures like Muhammad, Jesus, Mani, etc. It’s more accurate to say the book offers a much more critical look at Muhammad than we’re used to seeing in this age of Islamic censorship. An interesting presentation of the blood-soaked aspects of “the prophet’s” life and his intense hatred of women and near-worship of rape. The book goes much deeper than Muhammad’s famed marriage to a nine-year- old girl. 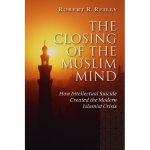 THE CLOSING OF THE MUSLIM MIND: HOW INTELLECTUAL SUICIDE CREATED THE MODERN ISLAMIST – By Robert R Reilly. I love this book and I think a play could be adapted from it that would be the Muslim equivalent of Brecht’s Galileo. This book examines the crucial period when Islam was at the crossroads roughly a thousand years ago. Religious literalists clashed with scholars who took a more open-minded approach to Islam. As we all know the literalists won out, miring the Muslim world in savagery and superstition the way the West would have suffered if people hadn’t eventually stood up to Christianity.