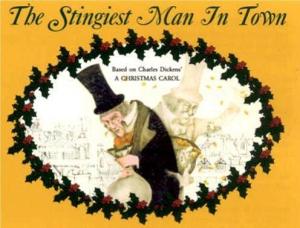 THE STINGIEST MAN IN TOWN (1953) – For  several years only the soundtrack for this terrific musical was available because the bulk of the video from this television production was missing. As of a few years back all the video has been restored so this Christmas season treasure can finally be enjoyed in its entirety.

Most people are only familiar with the 1978 Rankin-Bass Cartoon version of The Stingiest Man in Town, which chops the story down and omits or shortens a few songs. Here in all its glory is the original live 1953 production from December 23rd, rebroadcast in 1956, hence the 1956 date on some copies. Basil Rathbone stars as Scrooge, Johnny Desmond plays Nephew Fred, Martyn Green plays Bob Cratchit and Vic Damone appears as the young Ebenezer Scrooge at Fezziwig’s party.

Many of the songs in this musical have become Christmas song standards and people are often amazed that The Stingiest Man in Town is where the songs originated. An Old Fashioned Christmas, Listen to the Song of the Christmas Spirit, Yes, There is a Santa Claus, and Birthday Party of the King are among the  holiday classics that were first penned by Fred Spielman and Janice Torre for this Christmas masterpiece.

The live nature of the original broadcast shows in a few missteps by dancers and an occassional muffed line by the actors but to me that enhances the fun. The special effects are very primitive but very effective at times, especially in the scene where Marley’s Ghost shows Scrooge all the other souls that are bound in chains like he is. As usual Belle is presented for MUCH longer than she was in the Dickens novel but some creative choreography during the parting duet she shares with Young Ebenezer depicts a literal wall forming between the two of them.

My only complaint about this production is the way that so much of the Christmas Yet To Come portion is wasted on a long, wordless dance number. Far too many of the scenes from Scrooge’s jaunt to the future are left out and could easily have fit if the dance number had been slimmed down a little. As it is it feels almost as rushed as this same part of the story seems in the later 1950’s television musical version titled simply A Christmas Carol. Basil Rathbone portrays Marley’s Ghost in that version, leading to some confusion between the two musicals.

Other memorable songs from this holiday gem are the title tune, plus Humbug, One Little Boy, I Wear A Chain and a few narration songs sung by the Four Lads, none of whom looks a day under 40. Mankind Should Be My Business, an emotion-charged song sung by the reformed Ebenezer Scrooge, will have you in tears as it did Basil Rathbone while he sang it. If you enjoy the Dickens classic you should no doubt have a good time with this very festive and moving musical.