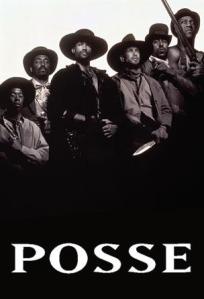 Frontierado is coming up on Friday, August 7th!

POSSE is a terrific western about a gang of African American gunfighters (plus the goofiest Baldwin brother) involved in an action-packed epic journey across the American west. The Frontierado holiday (which will be here Friday August 7th) is the perfect time of year to hunker down with this film while drinking a Cactus Jack or a Deuces Wild or two. I’ll review the recipes for those mixed drinks in a few days, for now we’ll focus on this movie on our countdown.

Posse stars Mario Van Peebles, who also directed, as Jesse Lee, the brooding, revenge-driven hero of the saga. He and all but one member of his gang, our titular posse, are soldiers fighting in Cuba during the Spanish-American War in 1898. A dangerous assault they carry out turns out to be  a plot by their commander, the villainous Colonel Graham (Billy Zane) to covertly lay his hands on a fortune in Spanish gold.

The Posse carries out the raid, then they survive Colonel Graham’s treacherous attempt to have his most loyal troops gun them down for alleged desertion to cover up the existence of the gold. Our heroes are forced to flee Cuba with the gold and begin an epic journey across the western states, headed for Freemanville, a fictional African-American town in California. Once there they help Jesse Lee get revenge on the people who lynched his parents, the corrupt white lawmen in a nearby town.

Each stage of their journey is an action-filled set piece as our heroes remain on the run from legitimate lawmen as well as from the soldiers of the relentless Colonel Graham, who lost an eye in the battle with Jesse Lee in Cuba and wants some payback of his own as well as the Spanish gold. The journey westward begins in 1890’s New Orleans, where the gang acquires their only non-soldier in the form of gambler/gunfighter Father Time, played by Big Daddy Kane.

Other members of the Posse include Tommy Lister as the huge, hulking man ironically called “Tiny” and who is pretty much Little John to Jesse Lee’s Robin Hood, Charles Lane as Weezy (insert your own Jeffersons joke here), the mousy guy who gains courage as the adventure continues, Tone Loc as the wry and sardonic Angel and Stephen Baldwin as Jimmy J. Teeters, the cardplaying, insubordinate white officer that Colonel Graham saddled Jesse’s military unit with in Cuba.

Our heroes shoot and ride their way across plains, snow-capped mountains and deserts before reaching Freemanville, which could also be called “Blaxploitationville” since about 90% of the inhabitants are African American performers who were staples in blaxploitation films of the 1960’s and 70’s. (That’s not a complaint by the way. I think blaxploitation is a misunderstood and underappreciated genre that I will cover in great detail in the future, especially regarding its parallels with Spaghetti Westerns.)

Among the citizenry we find Robert Hooks, Trouble Man himself, as Jesse Lee’s father (seen in flashbacks), Isaac “Truck Turner” Hayes and Pam Grier AKA Foxy Brown, Coffy, Sheba Shayne and Friday Foster. Naturally Van Peebles’ father Melvin also lives in the town as a character called Papa Joe. Melvin directed and starred in the blaxploitation classic Sweet Sweetback’s Badasssss Song, with his son Mario as one of the little boys who set a police car on fire.

Another significant cast member is African American film icon Woody Strode as the elderly storyteller. Strode not only appeared in John Ford westerns but also portrayed one of the gunmen blown away by Charles Bronson at the beginning of Once Upon A Time In The West, previously reviewed here at Balladeer’s Blog.

On the way west Jesse Lee had some of the Spanish gold melted down into gold bullets by a blacksmith and our hero uses those special bullets to perforate the bodies of the many lynch mob members who killed his parents. Squeamish viewers will be glad to hear that nobody ghoulishly digs the bullets out of the corpses to retrieve the precious metal, like in the bizarrely violent Spaghetti Western called Django Kill, which also featured gold bullets.

Naturally Colonel Graham eventually trails our heroes to Freemanville,  where he and his soldiers form an alliance of convenience with the white racist authorities from the nearby town. All plotlines converge in the action-packed, bittersweet finale to this wonderful film. In addition to being expertly mounted Posse features wire-to-wire gunfights, brawls, chases, explosions and even a sword fight thrown in for some variety.

(P.S. As with the fictional town of Silverado, Freemanville features frequently in the Frontierado Sagas I write and is the eventual home of figures like Bison Bloodworth, Doc Robyn and Kid Equus.) Here is the trailer: http://www.imdb.com/video/screenplay/vi4154196249/