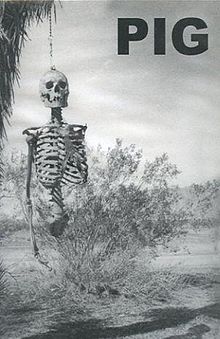 PIG (1998) – This cult horror film was a joint project between the legendary Rozz Williams and Nico B. I’m about to commit cinematic blasphemy by pointing out that in my opinion this is one of the most overrated “art” films of all time. Maybe if Pig had come out before Luis Bunuel’s Un Chien Andalou from NINETEEN TWENTY-NINE it might deserve the praise heaped upon it.

As it is, though, not only has this film not stood up under the test of time but it’s even difficult to see why it was so acclaimed back in 1998. By then movies like Tetsuo and both Nekromantik flicks had already pushed past many boundaries that Pig doesn’t even approach, let alone challenge.

The film is in black & white and depicts a (sometimes) pig-masked serial killer who tortures his prey before killing them. His “calling card” of sorts is his habit of carving the word “PIG” on the bare chests of his victims. An obviously willing and masochistic male victim has a rendezvous with the serial killer and the pair travel to an abandoned, run-down house in the desert, numbered “1334” (the title of the sequel Nico B made years later).

The murderer ritually binds, tortures and kills his victim in scenes that are incredibly mild in these post-Hostel times. Even the vaunted “penis mutilation” scene seems to have been done with a Whizinator or some other form of prosthetic. Jorg Buttgereit’s Schramm from a few years earlier had done cock torture better. Plus it was self-inflicted cock torture in that movie.

Pig‘s biggest claim to cult status is the Satano-Nazi book titled Why God Permits Evil which is frequently consulted by the pig-masked killer like it’s a cross between the Necronomicon and a cookbook. Some editions of the film come with slimmed-down (40 pages) copies of the actual book, loaded with excellent artwork and eerie poetry by Williams. The book is much more entertaining than the movie.

There are surreal scenes in Pig that imply the killer and the victim are “becoming as one” and other symbolism straight out of film school projects. Even at just 23 minutes Pig overstays its welcome and I found myself bored. The biggest compliment I can pay to this movie is that, if it hadn’t been preceded by seven decades of transgressive cinema it would have been a turning point in the art of film.