PULP HERO G-8 AND HIS BATTLE ACES: STORIES ONE HUNDRED TO ONE HUNDRED-TWO 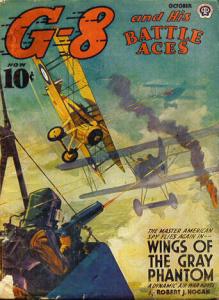 100. WINGS OF THE GRAY PHANTOM (October 1942) – Yes, it’s the 100th issue of the G-8 Pulp magazine! An old foe – Mr Matsu – returns for the occassion. As a quick reminder to people unfamiliar with World War One during THAT war Japan was on the side of the Allied Powers, not the Central Powers.

The Japanese Mr Matsu is a traitor who took his scientific inventions to the Central Powers because they offered him more money than his native Japan did. This time around Matsu’s come up with a way of making fighter planes virtually invisible.

These Gray Phantoms are mowing down Allied planes at an incredible rate and as always it’s up to G-8, Bull and Nippy to find a way of defeating Mr Matsu’s creations. G-8 manages to steal a helmet that enables its wearer to see the Gray Phantoms, but will it be enough to turn the tide?

Bull Martin has a reunion with Mel Arthur, an old football teammate from college. Lieutenant Arthur is a member of the “Distant Flash” Balloon Corps now. Meanwhile Battle, G-8’s British butler, gets the spotlight in one of Mr Matsu’s death traps: the man is bound in place while a flamethrower on wheels draws ever-closer. Plus Nippy successfully forges a German officer’s signature at one point in the story.

This anniversary issue also featured an item supposedly written by the “real life” G-8, who was still alive with World War Two raging. He presented a look at the B-25 bomber, the aircraft used in Doolittle’s famed raid over Tokyo. He also claimed he was still active duty under his real (Top Secret) name and commanding an air base.

101. THE SQUADRON OF DEATH FLIES HIGH (December 1942) – The return of the super-villain called Steel Mask, the mad German who hid his disfigured face behind a metal mask decades before Doctor Doom and Darth Vader came along.

Steel Mask is not alone and has assembled a legion of reanimated corpses … making it the umpteenth zombie army our heroes have battled. The 110th and final G-8 story can’t get here quickly enough at this point.

It’s sad and disappointing to have to wade through so many rehashings of the early, riveting dieselpunk adventures in this Pulp series. Try to take heart, though, there are a few bright spots amid the sea of repetition that still lays ahead of us.

R-1, G-8’s spy girlfriend, makes what turned out to be her final guest appearance in this tale. All this plus G-8’s prim and proper British manservant Battle in disguise as an old German scrubwoman!

102. PATROL TO END THE WORLD (February 1943) – Introducing an all-new foe for G-8! His name is Dr Wormer, and no doubt he’s the ancestor of Dean Wormer from Animal House (I’m kidding!).

Dr Wormer dresses sharply, in a dark cloak with a Maltese cross insignia. He’s easily the most over-the-top maniac G-8 and company have faced since the Serpent or maybe even Grun the Primeval.

Wormer’s invention is a real yawner, however, just another variation on threats from previous stories. In this case a form of super-explosive in powder form. If it can be mass-produced it will change the course of the war, yadda yadda yadda … been there, done that.

And no, Dr Wormer at no time says “I hate those guys” of G-8 and his Battle Aces. However, there is a light-hearted bit at the end of the story – since Battle got captured and tortured by Dr Wormer because of a screw-up by Bull and Nippy, G-8 made the two of them split Battle’s butler duties until the British gentleman could recover from his ordeal.

71 responses to “PULP HERO G-8 AND HIS BATTLE ACES: STORIES ONE HUNDRED TO ONE HUNDRED-TWO”