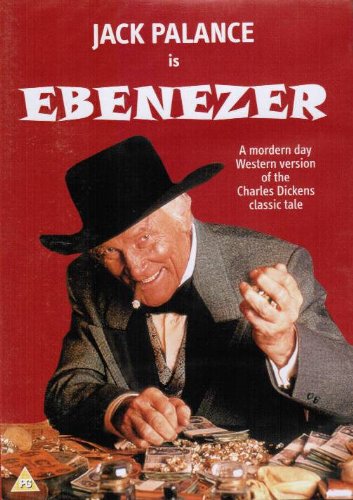 It’s hard to believe it’s been a whole year since last Christmas Day! Christmas Carol-A-Thon 2014 comes to a close with the 1998 telefilm Ebenezer, the only non-porno version of the Dickens classic to feature a whorehouse! Well, as long as you don’t count whatever underhanded business Scrooge and Marley are running in the Alastair Sim version anyway. (I’m kidding!)

Previously Balladeer’s Blog has reviewed The Trail to Christmas, a version of A Christmas Carol adapted to the American West of the 1800’s. Ebenezer adapted the Dickens novel to the wild west of Canada in the 1800’s, which adds an extra layer of novelty to this production. Casting Jack Palance as Ebenezer Scrooge was the real strength of this adaptation!

Scrooge’s late partner is called Jacob Marlowe instead of Marley in this film and there’s a gratuitous whorehouse Madam as one of the many people who owe Scrooge money. The tayloring of the Ghosts is always a key aspect in any Carol adaptation and Ebenezer does not disappoint on this level.

“I crap bigger than Tiny Tim.”

Palance’s Ebenezer Scrooge was a promising business student but the collapse of his father’s business caused him to be yanked out of his schooling prematurely. He then robbed money from his employer Fessiwig (sic) and became a gambler, gunfighter and con man roaming the west and preying on innocent people in all manner of vile ways.

This Scrooge actually marries his past love Belle but only so he can underhandedly sell her family’s ranch out from under them, a betrayal that causes the death of Belle’s father. His wife leaves him, not wanting anything more to do with Ebenezer and his ill-gotten fortune.

Beautiful Michelle Thrush as the Ghost of Christmas Past, or GOCPILF.

This is a fun version of the Carol, albeit not a particularly emotional one, but it has such a good time adapting all the story elements to its Western Canada setting that you can’t help but like it. Ebenezer is an enjoyable trip and hits nearly every story high point from Nephew Fred’s visit to Scrooge toying with Bob Cratchit when he’s late to work at the saloon on the day after Christmas.

Well, that brings this year’s Christmas Carol-A-Thon to a close! Be here next year when the 2015 edition begins on the Friday after Thanksgiving!