JEB BUSH: THE LOWEST LIFE-FORM ON THE PLANET 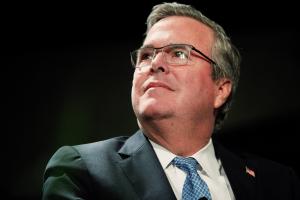 Welcome back to Balladeer’s Blog, the only site on the internet that criticizes Liberals and Conservatives equally. The repulsive Jeb Bush, brother of George W Bush and the son of George Herbert Walker Bush, is running for president. You’d think a man with that last name would be ashamed to show his face in public ever again, but no, Jowelly Jeb apparently thinks that all the abuse people heap on his bloated rich pig family is just jealousy or something.

I can’t imagine what type of campaign slogans this sample of political bacteria will use in their campaign. Maybe something like “JEB BUSH: He’s the only man who could make Americans miss Barack Obama” or maybe “JEB BUSH: The pudgy harbinger of national suicide”. For a campaign song Jeb could use that ditty from the Marx Brothers movie Duck Soup:

If you think this country’s bad off now / Just wait til I get through with it!”

Hey, don’t laugh, a country that will elect Barack Obama will elect ANYBODY!

16 responses to “JEB BUSH: THE LOWEST LIFE-FORM ON THE PLANET”