Balladeer’s Blog resumes its look at the neglected Pulp Hero G-8. This is a story-by- story look at the adventures of this World War One American fighter pilot who – along with his two wingmen the Battle Aces – took on various super- natural and super- scientific menaces thrown at the Allied Powers by the Central Powers of Germany, Austria- Hungary and the Ottoman Muslim Turks. 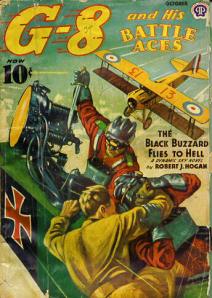 73. THE BLACK BUZZARD FLIES TO HELL (October 1939) – Introducing a new member of G-8’s Rogue’s Gallery of foes – Nordlich the Inventor! Herr Nordlich has put his genius to work and has come up with stealth planes coated in a special coal-black paint and capable of carrying over twice the bomb payload of other planes. In addition he’s invented special helmets that permit the planes’ pilots to see each other AND see in the dark of night.

The stealth planes’ debut mission finds them audaciously bombing the HQ of G-8 and his Battle Aces at Le Bourget Field! The emboldened Central Powers are exploiting this technological edge to the fullest so it’s up to G-8, Bull, Nippy and R-1 to root out the secrets of Nordlich’s deadly Black Buzzard planes and to find a weakness that can be used to bring them down.

Battle becomes a reluctant hero once again in this story, providing G-8 with explosives disguised as eggs in a very “Q” like maneuver. For his part in helping to defeat Nordlich’s futuristic aircraft the British manservant gets decorated by American, French and British generals. His beloved Nurse Arabella Hawkins is one of the onlookers.

74. RED FANGS OF THE SKY EMPEROR (November 1939) – It’s time for yet another of the fun super-villain team-ups that were so big in these later G-8 adventures.

This time around a deadly alliance has been struck between Chu Lung, the Chinese genius who did more for the Central Powers war effort than his entire country did for the Allied Powers in real life AND Mr Matsu, the traitor from the Allied Powers member nation of Japan!

These two dangerous men have come up with a futuristic super-weapon: a high-tech piece of artillery that, once mass-produced, will irreversibly change the course of the war in favor of the Central Powers! G-8 and his Battle Aces are assigned to prevent that from happening, a task easier said than done.

Mr Matsu tries to kill the captured G-8 by literally burning him at the stake in a truly Old School deathtrap. And for trivia buffs this story finds Bull Martin spouting his saying “Holy herring” a record FOURTEEN times.

75. THE FALCON FLIES WITH THE DAMNED (December 1939) – And speaking of super-villain team-ups, we get two in a row this time! G-8’s archenemy Doktor Krueger has once again joined forces with Steel Mask, the German villain who hid his disfigured face behind a metal mask decades before Doctor Doom and Darth Vader came along.

This deadly duo has enacted a plan involving a dual threat. The first part: a device that shoots unbreakable nets that snare Allied planes and bring them down in flames. The second part: heat pellets that cause everything they strike to burst into flames!

Robert J Hogan’s fictional head of American Intelligence – A1 – returns in this tale. When he tries to rein in G-8 and restrict the freedom of action he and his Battle Aces enjoy our hero at first acquiesces but eventually has a fiery confrontation with his haughty superior.

10 responses to “PULP HERO G-8 AND HIS BATTLE ACES: STORIES SEVENTY-THREE TO SEVENTY-FIVE”