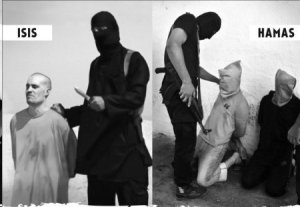 I guess Islam is Islam

Okay, Palestinians, you’ve convinced me. I had always been a big supporter of the Two- State Solution but you have convinced me I’m wrong for thinking of you as civilized human beings who can operate a state that would not just be another Muslim theocracy advocating non-stop bloodshed toward non-Muslims. I was wrong. You don’t deserve your own state and you would be just another ISIS or Al Qaeda or any of the other organizations that go under the umbrella of I.S.L.A.M. (Intolerant Savages Loathing All Modernity).

The Palestinian Authority under Chairman Mahmoud Abbas and his Fatah movement praised the Muslim terrorist who killed three-month old Chaya Braun and injured eight others last week calling him a “martyr” and considering his suicidal attack “his wedding”. The wedding remark is, of course, further proof that even THE OFFICIAL REPRESENTATIVES of the Palestinians buy into the superstitious gibberish about slain Muslim fanatics being rewarded in a mythical afterlife with 72 Virgins (unless they’re killed by a woman – further evidence of Islam’s UNAVOIDABLE misogyny.)

I cannot under any circumstances picture any representatives of the U.S. government praising the soldiers who abused prisoners at Gitmo as “martyrs” let alone praising someone who deliberately killed a three-month old. I repeat, Palestinians – you proved me wrong. I realize the people who are right are the ones who have been saying that you just use the “Two State Solution” as political rhetoric to fuel you toward your ultimate destination – a One State Solution with NO Israel in existence.

And by the way, who in the 21st Century can possibly be so irrational that they still believe that ridiculous 72 Virgins nonsense? Oh, yeah … Muslims.