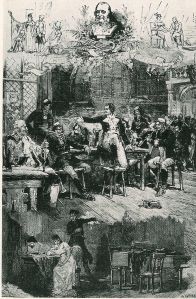 Yes, as if I wasn’t boring enough already I’m also into opera! Now, I know traditionally “the” Halloween Opera has always been Don Giovanni , but I’ve never bought into that notion since there’s really only one scene in the whole opera that qualifies as spooky and supernatural. At this time of year I prefer Offenbach’s Tales Of Hoffmann. Not only is it full of appropriately eerie and menacing elements, but it’s also the perfect opera for you to share with someone who’s seeing their very first opera.

One of the reasons for that is that it’s in short segments, surrounded by a wraparound opening and finale. Offenbach adapts short stories written by E.T.A. Hoffmann, who in real life was a pre-Edgar Alan Poe author of eerie short stories in his native Austria during the 1800’s. At any rate since this opera’s in short segments novices to the artform won’t have time to  get bored.

Another reason is that, though the climax of these tales no doubt seemed shocking to the people of Hoffmann’s (or for that matter, Offenbach’s) time period, modern audiences are so used to anthology series’ like The Twilight Zone and Tales From The Crypt, etc that today’s viewers will spot the “twist” endings coming from a mile away. This combats another common complaint of opera novices: that they have trouble following the story. 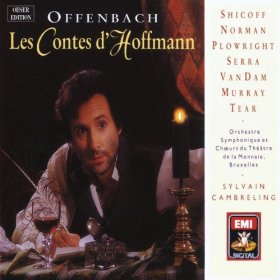 By the way, you can still buy the book of short stories that inspired this opera anywhere on-line. Just a few of the stories are adapted in the opera, which opens at a tavern on Halloween where several opera-goers have just arrived after attending a performance of Don Giovanni (In a nod to that opera’s traditional status as the official Halloween opera).

Our writer Hoffmann is at the tavern, drinking away various sorrows and the opera-goers convince him to regale them with some of his macabre “tales” in honor of the season. These tales form the episodes of the opera. Various productions change the order in which the tales are told, so the order in which I relate them isn’t set in stone. Offenbach died before he could finish setting the order and subsequent arguments over revisions that were found following his death lend adapters a fairly free hand in some elements of the “tales” themselves.

A young Austrian student (in some stage versions it’s presented as if  Hoffmann himself is the protagonist of each tale, but that’s not how it is in the original short stories) living in Paris falls in with the mad scientist Spalanzani, who is feuding with another mad scientist, named Coppelius over a recent mysterious “collaboration” of theirs. The student, meanwhile, falls deeply in love with Spalanzani’s flawlessly beautiful and utterly charming daughter Olympia.  Eventually Coppelius realizes he was double-crossed by Spalanzani earlier in the tale and returns to the latter’s laboratory home where, before the horrified student, he destroys their  joint creation (and I think we all know what that was). 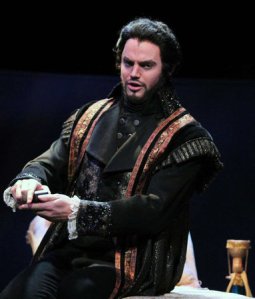 The next tale takes place in Venice, where a young gambler and wooer of the courtesan Giulietta is planning a rendezvous with her. Unbeknownst to the gambler, Giulietta is being manipulated by the sorceror Dapertutto, who is promising her an infernal diamond if she steals the gambler’s reflection (and his soul) just as she previously stole the shadow (and soul) of another of her lovers, Schlemil. After various deceptions Giulietta succeeds in her task. The two now-soulless rivals for her affections are still passionately in love with her and provoke each other into a duel. One of them kills the other with his sword, and is left behind to face the consequences of his actions while Giulietta laughingly rides off in a gondola with a third lover of hers.

The remaining story is set in Munich, where a young opera singer named Antonia has been spirited to by her father, Crespel, to separate her from her suitor. The reason is her suitor encourages Antonia to pursue her career as a singer, but she and her father know that she has inherited the same supernatural illness that killed her mother: when she sings her life begins to fade away. The suitor has trailed them to Munich where he tries to convince the girl to run away with him.

Enter Dr Miracle (since the opera’s in French it’s pronounced “Meer-AH-kluh” ) , a physician and magician (SCTV gave us The Fishin’ Musician, Hoffman gave us The Physician Magician) who caused the disease that afflicted both Crespel’s wife and daughter. Dr Miracle tells Crespel he can cure Antonia of the disease but his price would be her hand in marriage. Antonia, faced with a choice between a forced marriage to the sinister Dr Miracle or a hellish life spent unable to exercise the gift of her magnificent singing voice for fear of dying, is true to her artistic passions and sings herself to death, serenading her suitor with a song about her undying love.

(Note: In some stagings Antonia is tricked into singing her fatal song by Dr Miracle when Crespel refuses to let him marry his daughter, but I prefer the version in which Antonia gets to be more proactive)

To close the opera we return to the tavern, as Hoffmann has concluded his tales. The villainous Linsdorf plans to steal Hoffmann’s current love Stella, setting up the downbeat conclusion of the opera.

Tales Of Hoffmann  is available in various video versions, no two of which are exactly the same owing to the liberties that I mentioned can be taken with the tales, and, of course, this opera is still performed around the world. Plus stagings of it show up on PBS every so often, but I seem to be the only one pushing for it to supplant Don Giovanni as a Halloween opera. A particularly enjoyable thing to do after the trick or treaters are all gone is to throw in a video version of Tales Of Hoffmann and watch it with someone dear to you. (THIS WAS ORIGINALLY POSTED HERE AT BALLADEER’S BLOG ON OCT 30TH, 2010)

4 responses to “THE BEST HALLOWEEN OPERA: TALES OF HOFFMANN”