Balladeer’s Blog presents another look at the legendary tales of two more underappreciated Wild West gunslingers since the Frontierado holiday is fast approaching! Friday August 1st will mark the event, the yearly celebration of the myth of the old west, not the grinding reality. And tonight the American Heroes Channel debuts their series Gunslingers to tie in with the Frontierado holiday! 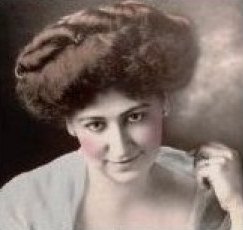 1. MADAME DUMONT – Decades before Poker Alice and Lottie Deno Eleanore “Madame” Dumont made a name for herself as a blackjack-dealing gambler and gunslinger. Much of the Madame’s early life is unknown but she supposedly was born in France around 1830. In 1854, when the record of her activities becomes more concrete, she arrived in Nevada City, CA as the Gold Rush was still at its peak.

The charming and aristocratic Madame Dumont had already acquired a small fortune in gambling winnings after playing cards and slinging lead in mining camps throughout northern California. Eleanore’s cash and her nascent reputation for being able to maintain order with her own guns if necessary made it easy for her to immediately open her casino named Vingt- et-Un (“21”) right on legendary Broad Street itself.

Madame Dumont’s casino was hugely successful, with the most popular table being the one where she herself dealt blackjack. No cursing or spitting were permitted and gamblers lined up to compete against “the Madame”, who would treat losers to champagne on the house.

Before the year was out Eleanore formed a business and romantic partnership with gambler/ gunfighter Dapper David Tobin. The Vingt-et- Un expanded into roulette, faro and other games of chance under the new team and was rechristened The Dumont Palace. A suite of rooms at the National Hotel provided the love nest where Madame Dumont and Dapper David could retreat to during non-business hours.

Two years later Tobin began making noises that Eleanore should retire and let him run the Dumont Palace alone. This resulted in a series of very public quarrels and very passionate reconciliations until, eventually, the love affair had run its course. Tobin demanded his half of the business be bought out and Eleanore obliged. Dapper David took his proceeds back east to run his own shady gambling network in a fashion more akin to 20th Century gangsters.

With the end of the great romance of her life Madame Dumont found herself much less fond of memory-filled Nevada City. She sold her “palace” and took to touring casinos throughout California, Oregon and Washington as a celebrity gambler. Eleanore’s charm and skill with a pistol protected her from sore losers and overly amorous admirers.

In 1860 the Madame opened up a new Dumont Palace in Virginia City, NV during the Silver Rush. Eleanore spent $30,000 on the furnishings and even had a string orchestra providing the music as her usual “no cursing and no spitting” rules were in place once again. Missing her life as a wandering gambler/gunslinger Dumont sold out again in 1863 and began roaming the mining towns and casinos in Montana and Idaho, mixing card-playing in with brief flings with outlaws in Handsome Henry Plummer’s sprawling organization.

In Bannack, MT Madame Dumont bought into a partnership with an established casinoand brothel owner named McHarney (first name disputed). Legend has it Eleanore conspired to have her new lover John MacFarlane provoke McHarney into pulling his gun during a gambling dispute, during which MacFarlane blew McHarney away. MacFarlane was found not guilty by reason of self-defense and became Madame Dumont’s new partner. His ultimate fate is unknown but Eleanore eventually sold out yet again and returned to life on the road.

Other highlights of Madame Dumont’s checkered career included a brief stint in 1869 as an actual “madam” in San Francisco, using her guns to save Fort Benton, MT from a smallpox epidemic, tutoring a very young Calamity Jane plus using gunplay and persuasion to end a labor riot in Pioche, NV.

Throw in rumored marriages to ladykiller Jack McKnight aka “Jack of Hearts” and Colonel Kai Carruthers, one of whom ran off with all her money. By 1874 Dumont was a gambler in Panamint, CA and by 1876 was dealing blackjack in iconic Deadwood, SD. Like all professional gamblers Eleanore’s luck ebbed and flowed until in September of 1879 two gamblers in Bodie, CA cleaned her out of every penny she had left. The next morning she was found dead in her cabin after having swallowed a bottle of poison. 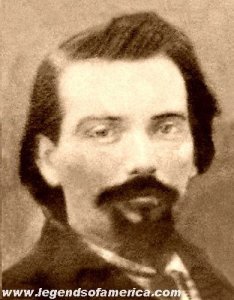 2. CLAY ALLISON – Robert Clay Allison was born September 2nd, 1840 in Tennessee. When the U.S. Civil War broke out Clay enlisted in an Artillery unit but was discharged after three months because of the excessively wild and violent rages that often consumed him. (“Wolverine in the oooooollld west!”) A head injury from his younger years is often blamed for these episodes that would haunt Allison – and those around him – for the rest of his life.

In September of 1862 Allison enlisted in the Tennessee Cavalry outfit bankrolled by the repulsive Nathan Bedford Forrest, for whom Clay’s violent tendencies were probably seen as a boon. (Forrest is infamous as the first Grand Wizard of the Ku Klux Klan after the Civil War) Clay and the rest of Forrest’s cavalrymen surrendered on May 4th, 1865, less than a month after Lee had surrendered to Grant.

Back home in postwar Tennessee Clay Allison found himself in occassional knife fights and fistfights with parties from both sides of the late conflict. Eventually he drew the ire of higher authorities and fled to Texas along with a few of his siblings and their spouses.

In western Texas Clay’s skill with a handgun was honed by some tutoring from experienced gunslinger Mason Bowman after Bowman got the better of Allison in a clash of weapons. As part of running his ranch in that part of the still-wild west Clay’s six-guns often blazed in action against Native American raiding parties, would-be rustlers and Mexican bandits who thrived in the borderlands.

A terror in the Cimarron Strip, Allison gained much popular acclaim in the fall of 1870 when he led a lynch mob in an armed raid in Elizabethtown, NM to bust out and hang Charles Kennedy. Kennedy was a mass murderer who had killed his daughter and several neighbors in a gruesome killing spree.

The next years were full of action for the disturbed man. Getting drunk then shooting up towns while naked and on horseback was a favorite indulgence. In addition Allison was noted for blowing away Mexican- Americans and anybody else who clashed with him along with any relatives of his victims who came after him in search of vengeance. Clay’s wealth, spread around in the right circles, helped ensure that he could get off on “self- defense” grounds.

Knife-fights, either for sport or in earnest were a particular favorite of Clay Allison. These were as off-the -record as games of Russian Roulette often were in Europe so no precise count is possible. The combatants would tend to dig a grave together, then fight in the close confines with the loser getting buried in the ready-made hole.

In 1874 his feud with Zachary and Chunk Colbert over the former’s way of abusing the ferry privileges he controlled across the Brazos River resulted in Clay gunning down Chunk when the man tried shooting Allison during a meal together. December 1876 saw Clay and his brother John raising hell in Las Animas, CO where Sheriff Charles Faber shot John and Clay then gunned down Faber and drove off his two deputies.

By March 1877 Clay sold his successful ranch to his brother John and moved to Hays City, KS where he thrived in the cattle brokerage business. In nearby Dodge City rancher Dick McNulty and Long Branch Saloon owner Chalk Beeson gained the distinction of getting Allison and some of his rowdy employees to back down and play nice. Years later serial liar Wyatt Earp would claim credit for intimidating Clay Allison in this incident even though eyewitnesses all later confirmed he was not there.

In 1880 Clay moved back to Texas and resumed ranching. February of 1881 was when Allison married his wife Dora and settled down, comparatively. The couple had two daughters and in 1883 Clay sold his ranch and bought a new one along the Pecos River near the Texas/ New Mexico border.

On July 3rd 1887 Clay Allison met his unusual end – a freak accident while loading supplies onto his wagon saw a possibly drunk Clay Allison fall under a wheel and get his spine crushed when his wagon rolled a little. An oddball ending for a notorious gunfighter.